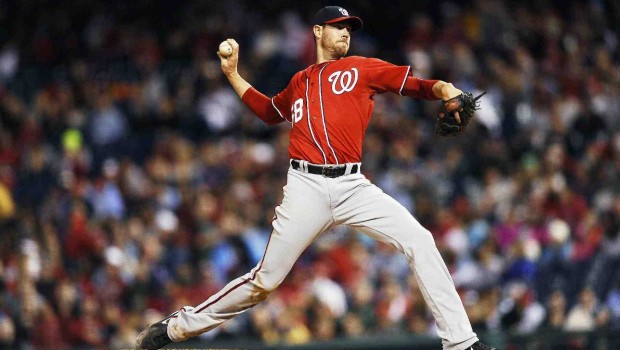 It’s only been five games, but the Washington Nationals have gotten off to a 1-4 start, which doesn’t exactly befit a team picked to win the National League this season.

The theme inside the Nationals’ clubhouse following Saturday night’s 3-2, 10-inning loss to the Phillies — a loss that left this team a surprising 1-4 to begin a season of sky-high expectations — was universal.

Like a talking points memo sent to every public figure in a political party to be dispersed across 24-hour cable news networks, the Nationals have made sure everybody is saying the same thing.

Are these guys really going to be fine in the long run? Yes, it’s only five games, but could some of the issues that have plagued this team in the season’s first week be more than a mere April blip?

A disturbing pattern has already been set, with the typical 2015 Nationals game playing out as such…

1. Starting pitcher dominates. (That group now owns a 1.99 ERA the first time through the rotation.)

2. Lineup scores an early run or two but can’t string together hits in bunches. (They’ve scored nine runs in five games and own a collective .544 OPS, 13th out of 15 NL clubs.)

3. Defense makes a key mistake at a critical moment. (They’ve allowed six unearned runs so far, most in the NL.)

Put that together, and you get a 1-4 record, three of those losses coming in games they led in the sixth inning or later.

“Our starting pitching’s been good,” Williams said. “We’ve struggled a little bit offensively with guys in scoring position, but we’ll get better at that. It’s important for us to catch the baseball. So Game 6 is upon us quickly, and we’ll be ready for that one.”

Indeed, the Nationals will be back at Citizens Bank Park on Sunday afternoon, with Max Scherzer on the mound to face Phillies journeyman Sean O’Sullivan. Perhaps a victory in the series finale would right the teetering ship and get things moving back on a positive track.

But for that to happen, the Nationals are going to have to do a lot of things a lot better. All of their negative trends were on display again Saturday night in what turned into the most frustrating loss of the season’s first week.

After getting 6 1/3 scoreless innings from Fister, the Nationals did score a rare insurance run and carried a 2-0 lead into the eighth. But Blake Treinen, making his first back-to-back appearances out of the bullpen, gave both runs back to Philadelphia via two singles and two doubles.

“I feel fresh, I feel good,” the right-hander said. “It just comes down to simply executing a pitch. Execute a couple more, and everything goes a different way.”

Things might have gone differently if not for another defensive miscue by the Nationals’ middle infielders. With one out and the tying runner on second base, Carlos Ruiz hit a chopper up the middle. Ian Desmond and Danny Espinosa each went after the ball. Neither fielded it cleanly.

“I went for it and kind of hesitated at the end, kind of saw him coming in my peripheral,” Espinosa said. “On my part, I should have just kept going and got that ball and made the play. I kind of hesitated, and I wasn’t able to get there fully how I wanted. I ended up just stabbing at the ball trying to stop it.”

It went down as a hit, but it was a product of poor defense, and it let the tying run score.

The Nationals could have made that moot with a golden scoring opportunity in the top of the 10th, if not for more fundamental issues. Taylor, on second base after a walk and the team’s first steal of the young season, broke slightly backward on Yunel Escobar’s base hit to left before taking off.

“[Andres Blanco] was playing kind of deep at third,” Taylor said, “and that’s the situation where I can’t get doubled up, so I was making sure the ball got through.”

That slight hesitation, though, may have cost him.

Third base coach Bobby Henley waved around Taylor, who was just reaching the bag when left fielder Ben Revere got the ball. Revere is known for possessing a weak arm, but his one-hop throw to the plate was on target and beat Taylor by several steps.

“We want to be aggressive in that situation,” Williams said. “One run potentially wins the game for us.”

Instead, the game remained tied entering the bottom of the 10th. It didn’t stay that way for long. Tanner Roark surrendered a quick single to Ruiz, who also flashed some heads-up baserunning by advancing to second on Grady Sizemore’s flyball to the warning track in left. That put Ruiz in scoring position for Odubel Herrera, the rookie outfielder who picked a most opportune moment to record the first hit of his career: a double down the first-base line that brought Ruiz home and sent the Nationals back to their clubhouse tied for last place in a division they’re overwhelmingly expected to win.

“It’s a long season,” Roark said. “Can’t really worry about it. You just go out there and do your thing each day. You think about what you could’ve thrown, or what pitch you could have executed a lot better, but then you move on. You think about it for 15 minutes and flush it down the toilet.Tomorrow is a new day and I’ll be ready to go.”

Forgive the Nationals if they have to fight the urge to start pressing and trying too hard to turn things around before this turns into something worse than simply a bad opening week to a long season.

“If we start pressing in Game 5, we’re in trouble,” Fister said. “We’re not even a week into the season yet. … It’s just a camaraderie thing. We’ve got to put our time in and continue to work hard, and our nose to the grindstone will pay off in the end.”