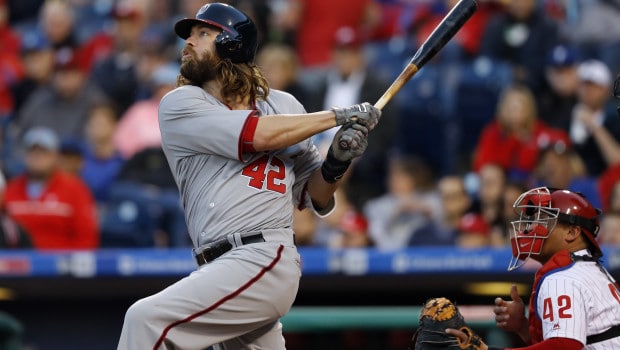 NATIONALS BLAST PHILLIES BACK TO REALITY, 9-1!

After starting the 2016 5-5, last night the Phillies got a look at a real World Series contender.

Bryce Harper had three hits, including a home run, and three RBIs, and Joe Ross allowed three hits in 7 2/3 shutout innings to help the Washington Nationals to a 9-1 victory over the Phillies at the Bank.

Former Phillie Jayson Werth (above) added two doubles and three RBIs, and Michael Taylor also went deep for Washington, which improved to 8-1 – the franchise’s best nine-game start since it was born in 1969 as the Montreal Expos.

”I thought it was a good team (before the season),” managet Dusty Baker said. ”We can get a lot better.”

Ross (2-0) struck out five and walked two. The 22-year-old, facing the Phillies for the first time, retired 12 straight before Freddy Galvis’ two-out single in the eighth ended his night.

”My fastball command was pretty good and the defense was making plays,” Ross said.

A day after becoming the eighth-youngest player in history to reach 100 home runs with a grand slam in a 6-2 win over Atlanta, the 23-year-old Harper belted his fourth homer of the season in the sixth inning to pad Washington’s lead to 9-0. The reigning NL MVP also made a highlight-reel, shoestring catch ofRyan Howard’s liner in the fourth inning.

The Nationals did most of their damage in the first inning when they battered Jeremy Hellickson (1-1) for five runs on six hits.

”We had some real good at-bats that inning,” Baker said. ”It helps your pitcher, your manager, your morale. I was pleased with everything.”

Hellickson’s outing was quite a turnaround for from the previous day when Vince Velasquez led the Phillies to their third straight victory by striking out 16 in a three-hit shutout of the Padres. That outing helped Phillies starters enter the day leading the majors with a 2.14 ERA, but that jumped to 2.72 after Hellickson allowed five earned runs on seven hits in three innings.

”What a difference one day makes,” Philadelphia manager Pete Mackanin said. ”Like a roller-coaster ride.”

The Phillies had won five of six and limited San Diego to one run and 13 hits during their winning streak.

Every Washington starter, including Ross, had a hit for the Nationals, who pounded out 16 of them against Hellickson and relievers Brett Oberholtzer, James Russell and Elvis Araujo.

Taylor opened the game by driving Hellickson’s second pitch into the seats in left, and Werth broke open the first inning with a bases-clearing double to left-center. Hellickson labored through 45 pitches, 19 balls, in the opening frame.

”The first inning set the tone for the whole game,” Mackanin said. ”It’s tough when you get behind early like that.”