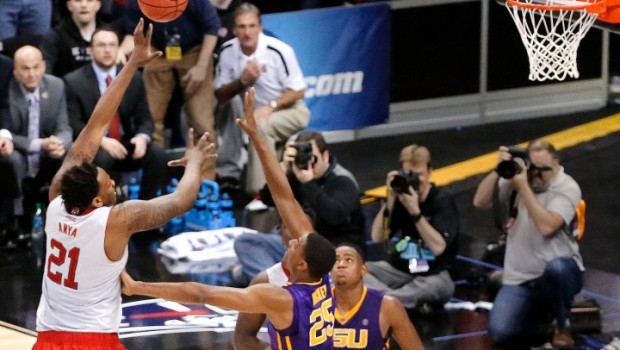 Villanova’s Saturday opponent, N. C. State, has had some big wins during the regular season — like pounding Duke 87-75 — but they slipped by LSU Thursday night 66-65 on a BeeJay Anya jump hook (photo above) with a tenth of a second remaining.

Anya’s game-winner capped a stunning collapse for LSU, which led by 14 points (62-48) with 9:13 remaining. From that point forward LSU scored just three points, all coming from the foul line, as they missed their final 12 shots from the field. Add in the fact that Johnny Jones’ Tigers also missed their final six free throws of the game, and it isn’t took difficult to see why NC State had the opportunity to come back.

But even with that opportunity a team has to take advantage, and thanks in part to Kyle Washington N. C. State was able to do so. Washington scored seven of his nine points in the early stages of the Wolfpack’s 18-3 game-ending run, and from there his teammates stepped forward on both ends of the floor.

Trevor Lacey added five points and Abdul-Malik Abu two during the run, with Anya responsible for the final four points of the game. And after being worn out by the tandem of Jarell Martin and Jordan Mickey for most of the first 30 minutes of the game, the NC State front court stepped forward when Mark Gottfried needed them most. Add in Cat Barber’s team-high 17 points, and the Wolfpack were able to find a way to win.

NC State has the talent to give Villanova trouble on Saturday, but it can ill-afford to play as they did for the majority of Thursday’s win.