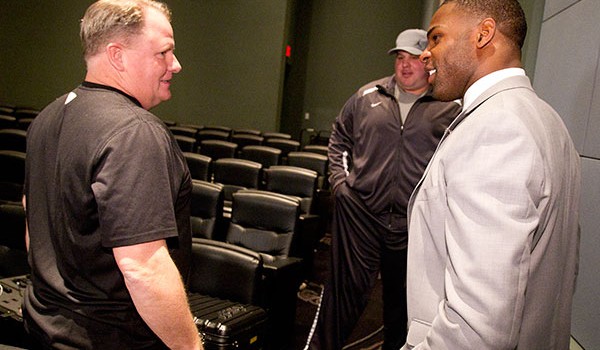 When Eagles Supreme Leader Chip Kelly surprised everyone — maybe even himself — by signing free agent DeMarco Murray to replace Shady McCoy in the Birds backfield, lots of folks pointed out that it made Philly better and diminished Dallas.

But Kelly says that never entered into his thinking.

“We never look at it that way,’’ Kelly said as reported in the Dallas Morning News.. “We’re just trying to acquire players. We don’t say let’s take this player over that player because it’s going to make that team weaker.

“I know Dallas is going to be a tough opponent when we play them this year.’’

An opponent in search of 1,845 yards rushing and 13 touchdowns that went missing the moment Murray signed with Philly.

“Obviously, you just look at him statistically in terms of what he did,’’ Kelly said. “You know what kind of workhorse back he is. He has unbelievable patience and vision.

“There’s a toughness to him. He never really takes negative yardage plays.’’

Murray was certainly in on a lot of plays for Dallas. He touched the ball a total of 497 times — 436 rushes and 61 receptions — during the regular season and two-game playoff push.

Backs with this sort of workload have traditionally suffered a noticeable decline in productivity the following season.

“We gave some thought to it,’’ Kelly said. “That’s why we wanted to bring in two running backs.”