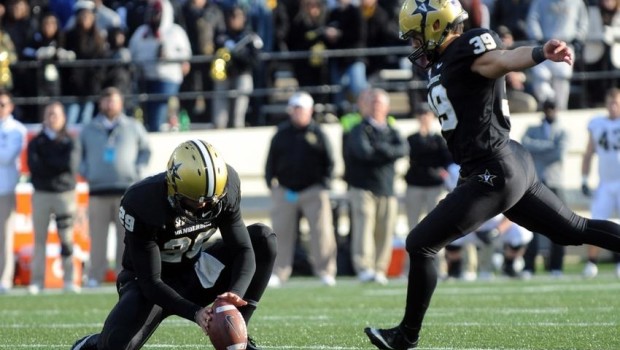 ‘MURDERLEG’ MAY BE AN EAGLES SPECIAL STAR

Spear was a terrific place kicker and kamikaze tackler for Vanderbilt

As OTA’s began this week in South Philly, many new players and old were under a magnifying glass.

And Chip Kelly was taking an especially close look at Carey Spear, rookie free agent place kicker from Vanderbilt who has been brought in to either push or replace current kicker Alex Henery, who had a lackluster 2013. Spear has brought with him the colorful moniker of “Murderleg”, which, if he lives up to that name, will justify Kelly’s faith in signing him as a free agent right after the NFL draft.

Henery finished tied for 22nd in the NFL in field goal accuracy, and his ability to get the ball into the end zone on kickoffs was on the wane most of last season, prompting Kelly to bring in Spear.

In 2013 at Vandy, Spear averaged 60.6 yards per kickoff, which also produced 22 touchbacks. “Murderleg” also has no problem running down field and bringing a kamikaze style to blasting the ball carrier with reckless abandon, even knocking himself out in the process to make the tackle.

That’s the kind of play Eagles fans will embrace and cheer for every time.