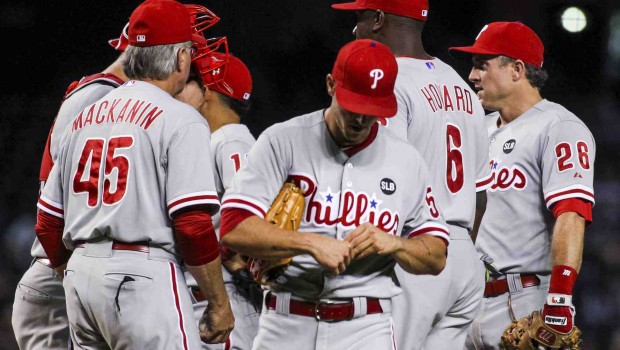 SO MUCH FOR PHILLIES’ JUGGERNAUT: YIELD 13 RUNS AGAIN IN LOSS!

It is fair to say that the bubble has burst on the Phillies.

Their 16-5 record coming out of the All-Star game break is a thing of the rear-view mirror, replaced by the stark fact that they have given up 26 runs in the past two games in Arizona!

The Diamondbacks feasted on Phillies’ pitching for a second straight night as David Peralta hit a grand slam in an 11-run second inning and tied a career high with five RBIs, leading the Diamondbacks to a 13-1 victory.

The 11 runs – all off starter David Buchanan (being pulled in above photo)  – were the second-most scored in an inning in Diamondbacks’ history. Peralta and Aaron Hill hit home runs and Jeremy Hellickson became the second pitcher in club history to collect two hits in one inning.

”As soon as I hit the ball I knew it was gone,” Peralta said. ”It feels good when you do something to help the team win. We are doing really well right now.”

Hellickson (8-8) allowed an unearned run and seven hits, striking out six in eight innings and improving to 6-1 in his last seven home starts.

”I can’t tell you the last time I went eight innings. The hits were nice as well,” Hellickson said. ”I will sit in the dugout as long as I need to. Let the guys score as many runs as they want.”

Arizona had a club-record 10 hits in the big inning, and five extra-base hits, which tied the team record. The 11 runs allowed by the Phillies were the most they gave up since allowing 12 in an inning on May 31, 1975.

Buchanan became the first Phillies pitcher to allow 11 or more earned runs in an inning since Al Jurisch, who surrendered 14 against the New York Giants on June 28, 1947.

The Diamondbacks, who won for the fourth time in five games, had four players with two hits in the same inning for the first time in franchise history: Yasmany Tomas, Hill, Chris Owings and Hellickson.

Peralta’s fifth RBI came in the fifth inning, a run-scoring single, and Jarrod Saltalamacchia hit a solo home run in the sixth.

The Phillies took a 1-0 lead in the first on a single by Ryan Howard and a fielding error that allowed pinch-runner Andres Blanco to score from first base.

The Diamondbacks have outscored the Phillies 26-4 in the past two games after a 13-3 drubbing Monday night. This is the second time the Diamondbacks have ever scored 13 or more runs in consecutive games, the last time Sept. 26-27, 2001, when they scored 15 in one game and 13 in the next against Milwaukee.

”We came out and really swung the bats. Very impressive,” Diamondbacks manager Chip Hale said. ”A good game plan, and they executed and kept it going. Even the pitcher. It was good to see.”