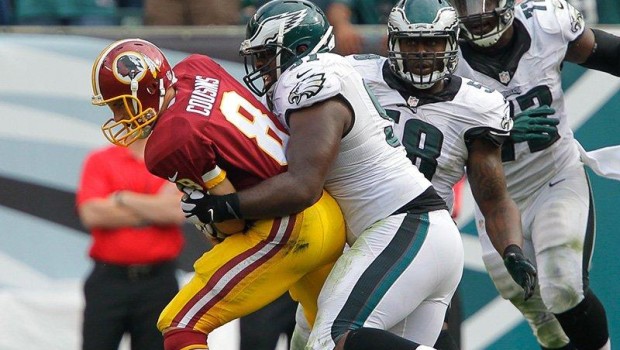 MUCH-MALIGNED EAGLES DEFENSE GETS TOUGH WHEN IT COUNTS

Fletcher Cox sacked Cousins when the game was on the line.

Eagles Nation has been critical of the team’s defense ever since Chip Kelly became coach last season and Billy Davis defensive coordinator.

And with good reason. At times in the Birds’ first three victories in 2014 — especially yesterday as Kirk Cousins shredded the secondary through the air — it seemed there was no defense.

But yesterday at the Linc, the unit that had allowed 511 yards and 34 points had to go back on the field one more time with 2:27 to play and a three-point lead to protect.

After a holding penalty on Brad Smith wiped out a 59-yard Donnie Jones punt, the veteran had to kick again and this time managed just 31 yards.

So Washington started at its 41 yard line, 59 yards away from a game-winning touchdown and a couple of first downs away from a potential game-tying field goal.

“Our guys just stepped up and kept their composure and won the game,” Davis said after the defense held in the Eagles 37-34 win over the Redskins Sunday.

“We just keep scrapping and fighting and when we need it the most they make plays.”

Washington ran the ball on first down and Alfred Morris, who had 77 yards on 22 carries, was stopped for no gain by Fletcher Cox.

“That was the drive of the game,” Cox said. “We were either going to win, or lose, on that drive. We had to come up big.”

Cousins looked for DeSean Jackson on second down, but missed him high and wide. Cousins went to Andre Roberts on third down, but Brandon Boykin made a diving stop to break up the pass.

“I knew they were in stack, so I kind of knew what was coming,” Boykin said. “I just made a play.”

Now it was 4th-and-10, with 1:52 left. The Redskins could have punted, and with three time outs left, hope to stop the Eagles and get one more chance.

Instead Washington head coach Jay Gruden went for it and Cousins threw incomplete for Pierre Garcon.

“It was do or die,” Boykin said. “We had to get a stop. If there was two minutes left, one minute left, we needed a stop.”

On their first 72 plays, the Redskins gained 511 yards. On their final four, they gained none.

“I know you want to know why we don’t play that way the whole game,” Davis said. “I don’t know. We’ll try to clean that up. But the way we end, it says a lot about the character of these guys and how they play their best when the game is on the line.”