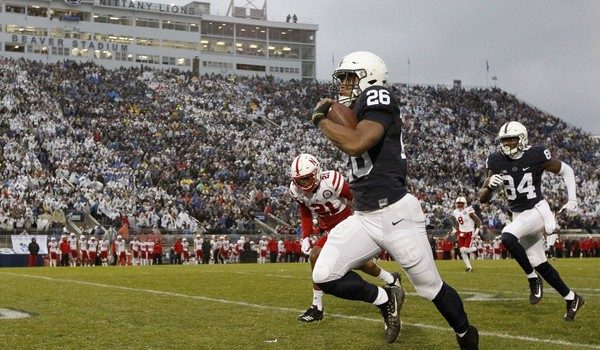 Saquon Barkley collected 224 yards and three touchdowns as No. 10 Penn State beat Nebraska 56-44 in its final home game of the season.

Barkley, slowed in recent weeks after a strong start to the season, rushed 17 times for 158 yards and three scores, and caught six passes for 66 yards, helping the Lions improve to 9-2 and 6-2 in the Big Ten.

PSU, which closes out the regular season next week at Maryland, generated its most points since it put up 63 against Illinois in 2005.

Barkley, who rushed 14 times for 142 yards and three scores in the first half, surpassed 1,000 yards on the ground for the third straight season, just the second player in school history to do that. He also broke PSU’s career record for rushing touchdowns. He has 39, one more than Lydell Mitchell, the previous record-holder.

Barkley gave the Lions the lead 57 seconds into the game when he broke off a 65-yard touchdown run, but Nebraska took advantage of two Penn State special-teams breakdowns to reel off 10 straight points.

A short punt by the Huskers’ Caleb Lightbourn bounced off the Lions’ Zech McPhearson and was recovered by Marquel Dismuke, setting up Drew Brown’s 28-yard field goal.

Then, with PSU backed up at its own 18, Blake Gillikin’s 18-yard punt gave Nebraska the ball at the Lions’ 36. Lee’s completions of 17 yards to JD Spielman and 18 yards to Stanley Morgan Jr. set up a 1-yard TD run by Devine Ozigbo.

The Lions answered with touchdowns on their next five possessions, all of them on drives that consumed at least 65 yards.

First McSorley’s 43-yard pass to Juwan Johnson led to Barkley’s 1-yard plunge, putting PSU ahead to stay at 14-10. Then Barkley jump-started an eight-play, 85-yard march with a 30-yard run; McSorley ended the drive with a 9-yard run.

The Lions’ 42 points at the break was their highest in a first half since they put up 56 at Illinois in 2005.

Nebraska cut the gap to 42-24 with two third-quarter touchdowns, on a 24-yard run by Mikale Wilbon and Lee’s 22-yard pass to De‘Mornay Pierson-El, but McSorley found Gesicki for a 17-yard TD just over a minute into the fourth quarter, and backup QB Tommy Stevens hit Nick Bowers for a 15-yard score.

The Huskers notched three TDs in the final 6:32, including Lee’s 3-yard pass to Jack Stoll on the game’s final play.