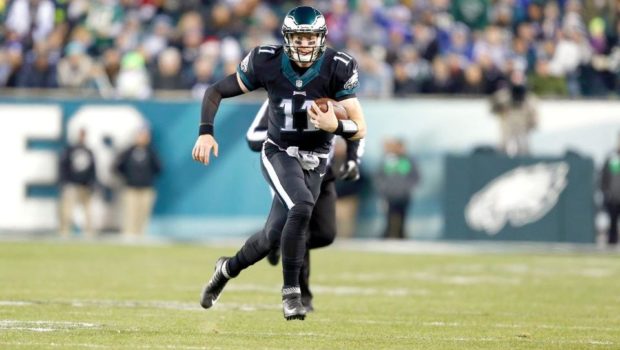 HOW MUCH BETTER WILL EAGLES’ CARSON WENTZ BE IN 2017!

Eagles coach Doug Pederson has never uttered a discouraging word about any of his players, at least not publicly, and he had special praise for rookie quarterback Carson Wentz:

”His progression from start to today is night and day,” Pederson said after the 27-13 win over the playoffs-bound Dallas Cowboys at the Linc.

”He’s an exciting player to watch and to coach. To do the things that he’s done is amazing and really looking forward to the offseason and building for next year.”

Wentz threw a pair of TD passes to lead the Eagles over the NFC East champion Cowboys in the regular-season finale. The Eagles (7-9) ended with consecutive wins, including a 24-19 victory over the playoff-bound Giants on Dec. 22.

”The biggest thing is building momentum,” Wentz said. ”We are building something special. We truly believe that in that locker room. I’m excited for the future.”

Wentz, the No. 2 overall pick, set a rookie record with 379 completions and became the first quarterback to start 16 games for the Eagles since Donovan McNabb in 2008. He helped the Eagles start 3-0 before a rough stretch filled with several ups and downs.

”We’re going home so that’s frustrating,” Wentz said. ”As a whole offense, we were never perfect. As the year goes on, I was learning. I was playing faster. All that experience was adding up. So I’m real excited for where we are headed.”

The Eagles enter the offseason knowing they must surround Wentz with more playmakers. The team hasn’t had a player reach 1,000 yards rushing or receiving in the last two seasons.

They traded away their 2017 first-round pick to Cleveland to move up and select Wentz in the draft. But they recouped a first-round pick from Minnesota when they traded Sam Bradford to the Vikings eight days before the season opener, paving the way for Wentz to start right away.

”It’s tough to win in this league without a quarterback and we’ve got a heck of a quarterback for the future,” tight end Zach Ertz said. ”I know guys are going to stay around here during the offseason to kind of build that chemistry with Carson because we know he’s going to stay in the area. We’re just stacking the bricks with each other every day.”

”He’s really seeing the field, surveying the field, using his legs,” Pederson said. ”He’s a gifted runner. He knows where everybody is going to be. He’s got great dialogue and communication on the sideline, on the field and his leadership ability.”