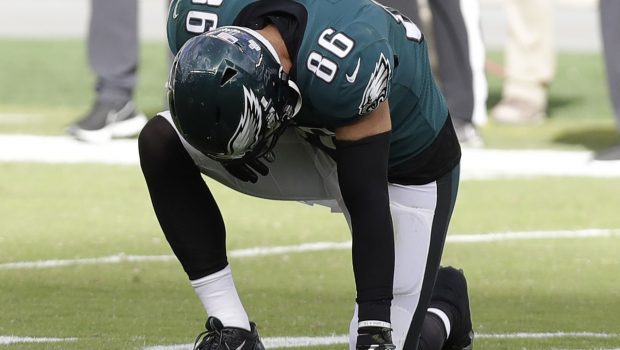 Jay Glazer of Fox Sports is reporting that Eagles Miles Sanders (knee) and Zach Ertz (ankle) will have MRIs today, .

“They’re more concerned about Miles’ Sanders knee than they are about Zach Ertz’s ankle,” Glazer reported.

Sanders got hurt at the end of his 74-yard run in the third quarter of the Eagles’ loss to the yesterday at the Linc. He didn’t return and finished 9-for-118 rushing.

Sanders, who missed the opener with a nagging hamstring injury, ranks 4th in the NFL with 434 rushing yards but only 19th with 71 in rushing attempts.

Ertz got hurt early in the fourth quarter on an incomplete pass from Carson Wentz. He did not return either.

The Eagles’ other notable tight end, Dallas Goedert, has been out since suffering a fracture in his ankle in the Bengals game. He’s eligible to return from Injured Reserve today.

Their other tight ends are recent acquisition Jason Croom, who caught a touchdown, and veteran Richard Rodgers. Caleb Wilson is on the practice squad.