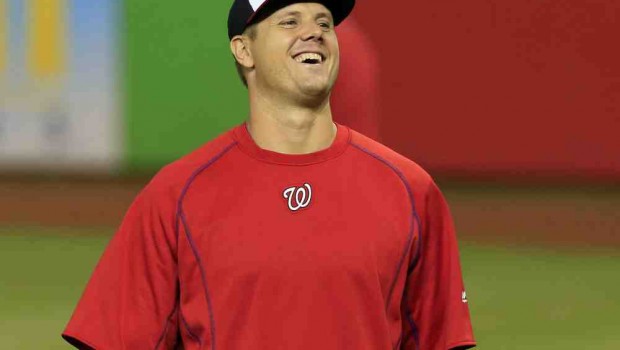 How was whining closer Jonathan Papelbon’s first day in Washington since his trade from the Phillies to the Nats?

Getting a Nationals jersey cost him $2 million, the difference between what his 2016 option with the Phillies would have paid him and what his newly agreed to deal with Washington will. In his first meeting with the media as a member of the Nationals, Papelbon said that money “made no difference.”

“To me it’s all about winning and being in a place I’m happy,” he said, one of more than a dozen times he mentioned the word “win” or “winning” in the 10 minutes of questions.

“I think the main reason why I accepted this trade to come here is because I’ve played against these guys for four years now and I’ve seen the way the organization has become and to me it’s a fitting organization for me,” Papelbon told the Washington Post. “There’s a bunch of baseball players here that want to win and that’s all I ask for is to come here and try to win.”

Over the past 10 seasons, no one has more saves (342), strikeouts (727) or pitched more innings (633) as a reliever than Papelbon. To create space for him, the Nationals had to shift Drew Storen from closing to the eighth inning. Papelbon said he understands the situation. When he pitched for the Red Sox in 2009, Boston acquired Billy Wagner to bolster the back end of the bullpen. Papelbon expressed displeasure. He’s pitched in tandem with Eric Gagne, too, and said they are two of his best friends in baseball now.

Storen’s only comment on the move was to say his agent and Mike Rizzo are in ongoing discussions. Nationals Manager Matt Williams said Storen did not ask to be traded, and is ready to pitch.