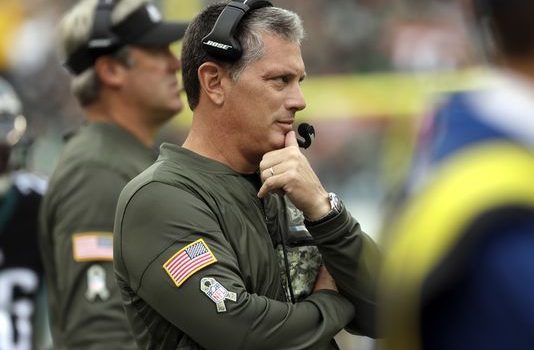 MOVE OVER BUDDY RYAN! HOW JIM SCHWARTZ MADE THE EAGLES DEFENSE GREAT AGAIN!

Jim Schwartz inherited one of the NFL’s worst defenses and turned it into one of the best in less than two years.

When coach Doug Pederson hired Schwartz to be the defensive coordinator in 2016, the Eagles were coming off three straight seasons ranked in the bottom four in yards allowed.

Schwartz changed the scheme back to a 4-3 base and rebuilt the defense using many of the same players left from the old regime. He also brought a swagger that’s reflected in his players.

But they’ve thrived under Schwartz because his system fits their skills.

“He always puts us in great position to make plays,” Jenkins said.

Schwartz made an immediate impact last season, helping the defense go from 30th in yards allowed and 28th in points to 13th and 12th, respectively.

This season, they ranked fourth in both categories and had the league’s No. 1 run defense.

While Minnesota’s top-ranked defense got most of the attention, Philly’s unit has been excellent in the playoffs.

The Eagles have allowed only 17 points in two games — one touchdown drive was 18 yards following a fumbled punt. They dominated the Vikings in a 38-7 win in the NFC championship game last Sunday.

Now, Schwartz has to devise a plan to stop Tom Brady and the Patriots in the Super Bowl.

“No player stands on his own,” Schwartz said. “The NFL in general, but particularly the Patriots, you can’t scheme for one player. If you do, then they have plenty of other players that can make plays. You have to do a good job against their entire offense, and you can’t really make it about one person.”

Schwartz began his NFL coaching career in Cleveland as a research assistant for Bill Belichick in 1993. After three seasons with the Browns, he spent three years as outside linebackers coach in Baltimore and then went to Tennessee. Schwartz served 10 seasons with the Titans, the last eight as defensive coordinator.

He coached the Detroit Lions for five seasons, leading them to the playoffs in 2011. Schwartz was Doug Marrone’s defensive coordinator in Buffalo in 2014, worked as a consultant for the NFL’s officiating department in 2015 and came to Philadelphia after Pederson was hired to replace Kelly.

“I owe a lot to Bill Belichick. He got my career started,” Schwartz said. “That’s the last thing that we’ll be thinking about in preparation. You think any of our players care that in 1993 I got hired as an unpaid intern? They are just going out and playing.

“We need to come up with a good plan. We need to execute. We need to keep in mind what we’re good at, keep in mind our matchups and all those different things. And if we do a good enough job at that, we’ll be able to come out with a victory.”

Schwartz holds players accountable in meetings, singling guys out if they make mistakes. But he does it in a way where he doesn’t alienate them.

“He cares about winning. That’s what he’s all about, not himself,” defensive end Chris Long said.

Despite Schwartz’s success in Philly, he won’t be leaving for another head coaching job just yet. The New York Giants and Arizona Cardinals were interested, but Schwartz wouldn’t confirm whether he interviewed with either team.