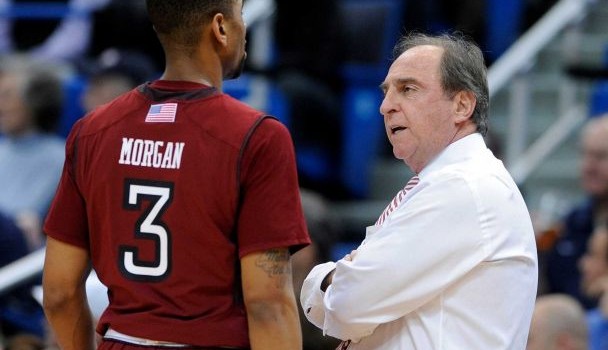 He couldn’t miss, from outside, or in, or at the line, and he carried Connecticut into the lead. Then, at halftime, Temple’s Jesse Morgan asked to guard UConn’s senior and things changed.

“That’s Jesse’s story,” Temple coach Fran Dunphy said. “Coach [Shawn] Trice came up and asked, ‘Can we have Jesse guard Boatright?’ and I said, ‘Whatever you guys think.’ Then one of our video guys asked if I thought about double-teaming. I said, ‘Yeah, I thought about it, but I didn’t have the guts to do it in the first half. We’ll do it now.'”

If basketball were chess, this would’ve been time to say “Checkmate.” If it were a restaurant, it would’ve been time for a UConn fan to say, “Check, please.” Boatright, who scored 21 points in the first half, got off only four shots in the second, two in a meaningless final minute, and Temple smothered the Huskies 75-63 in the regular-season finale for both teams before 10,206 at the Liacouras Center.

The Huskies (17-13) finished 10-8, sixth in American Athletic Conference play, a long, hard fall for the defending national champs. To get back to the NCAA Tournament, they will have to win four games in four days in the AAC tournament at the XL Center beginning on Thursday.

“They had two, three guys on me the whole time,” Boatright said. “Every screen, they blitzed it, ball screens, they blitzed it. Their game plan was to take me out of the game and let somebody else beat them, and that’s when it calls for somebody to step up and make a play and it didn’t happen.

Will Cummings scored 23 points, Morgan 17 and Quenton DeCosey 15, the latter two hitting killer three-pointers late in the game, as Temple, which won only nine games last season, finished 22-9, 13-5 in the league. The Owls will be seeded No. 3 or 4 for the league tournament and probably sewed up a spot in the NCAA Tournament.

Dunphy started his seniors who were honored before their last home game, and he stayed with them for four-plus minutes before inserting his regular starters. Temple led 7-6 when all the starters came in, and with Morgan hitting a couple of threes, jumped out to a 15-8 lead.

Then UConn’s senior, Boatright, took control of the game with threes on back-to-back possessions. Then he was fouled while attempting a three and made all three free throws. He hit his first five shots from the floor and had 16 points before 10 minutes were gone in the game and the Huskies, with a 10-0 run, took the lead.

Temple used a number of players of different sizes — Morgan, Jaylen Bond, Obi Enechionya — on Boatright. At one point they trapped him at midcourt, stole the ball and DeCosey went in for the score that put the Owls ahead for good 43-41 with 14:47 to play.

In the second half, Boatright did not make a basket until the 8:45 mark, his second shot of the half.

“Just use your instinct,” Boatright said. “All I can do is drag two or three people out and make a pass. Then you’ve got to create a play for yourself, or create one for someone else.”

After fumbling away a fastbreak chance, UConn yielded a three-pointer in transition by Morgan that stretched Temple’s lead to 63-55 with 3:59 left. DeCosey’s three mad it 66-56 with 3:12 left, and it was over. “They just out-toughed us,” said Purvis, who for the second game in a row was wearing the bumps, bruises and ice packs that come with hard fouls.