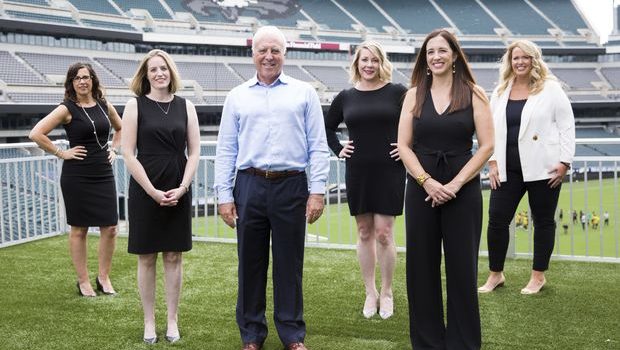 MORE THAN HALF OF THE EAGLES BIG BOSSES ARE WOMEN!

With some exception, opportunities for women in the NFL are rare, with just 29 percent of senior executive jobs in the league office being held by female employees.

However, as a recent Wall Street Journal story points out, the Eagles are bucking that trend; more than half of owner Jeff Lurie’s top advisors are women.

Lurie says that he didn’t specifically set out to hire women — “it’s really not strategic,” he said — but added that the Eagles specifically sought out diversity of thought, and that led them to bring on people who weren’t traditional NFL hires. “That seems to result in lots of women winning these hiring decisions,” he said. “It’s very interesting.”

“There’s an effort to bring in people with different viewpoints,” Aileen Dagrosa, the team’s general counsel, added. “We definitely don’t need someone that [says], ‘I’ve worked in sports all my life.’”

Ryan Hammond, the executive director of the Eagles Autism Challenge, also told the publication about how she initially left the team in 2008 because “I didn’t have anyone that really looked like me at the organization at the time” but rejoined years later because she had noticed a change in the Eagles’ hiring practices. “It’s amazing how much culture can change in a decade,” she said.

As the Journal points out, NFL franchise employees were only 28 percent women last year, and only 18 percent at the VP-level and above. Only 23 of the league’s 32 teams employed more than one female vice president last year.