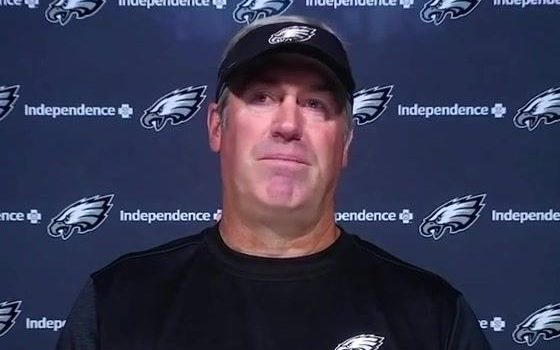 MORE MUSH FROM THE WIMP: HERE ARE EAGLES PEDERSON’S EXCUSES!

The Eagles gallantly came back from a deep hole yesterday and managed to get within two points.

But dumb-ass Doug Pederson botched whatever chance they had when he called a run when they went for two points to tie it.

The Ravens sniffed it out and the Eagles lost again, 30-28.

So, what did Pederson say afterward?

“So as the head coach, I can stand here and I’m proud of those guys in the locker room. And I know they are going to get beat down this week and that’s your (the media’s) job. But my job is to encourage them … I get it, there are no moral victories in the NFL. There are no moral victories at all and we are all graded on wins and losses. But for this team to hang together on the sideline, to not point fingers, to battle, to be in this position with all the mistakes that were made in the first half, really offensively, and then we missed the kick, the field goal at the end of the half, those are the differences in games. Those are things that we’re going to learn from and we’re going to get better from.’ So I’m proud of the guys for the way they battled today.”

“We dropped a big third down, turnover. We dropped a touchdown. We missed a field goal. It’s self-inflicted wounds,” Pederson said. “It’s things I’ve been talking to our team all week about, right? And when you’re playing good football teams, like the Ravens are, you can’t make those mistakes. Can’t do it and with the amount of injuries that we do have – look, I’m going to stand here and tell you that we are not going to make excuses. The guys in the locker room are not going to make excuses. And so that’s what happened.

“There are enough things in this game, too, to point at from decisions I made to execution on the field. We didn’t get the job done.”