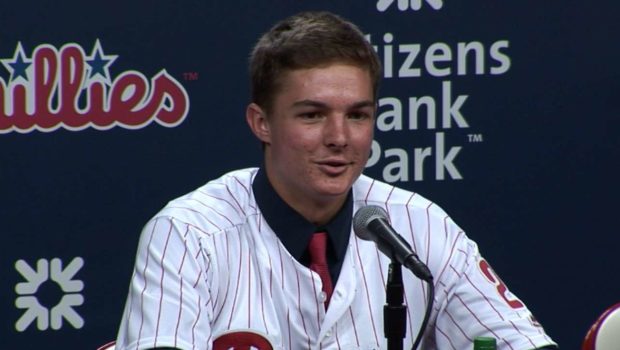 MONIAK DRAFTING SHOWS PHILLIES ARE ALL IN ON OFFENSE

As the 2016 Phillies continue to have offensive woes, fans can take heart in the fact that the team is drafting bat after bat.

Last year the Phillies signed their No. 1 pick, Cornelius Randolph. It was about 11 months ago that the Phillies officially announced the signing of Jhailyn Ortiz, rated by MLB.com as the top international prospect for 2015.

And the timing for Moniak’s unveiling couldn’t have been better. The Phillies ended a dispiriting homestand Monday, having scored a total of nine runs.

This organization has rarely spent big on international free agents before it spent a reported $4 million to sign Ortiz. And that with Randolph ($3.2 million for the 10th overall selection) and Moniak ($6.1 million) they have spent $13.3 million for three players they hope will add juice to the lineup.

It wasn’t that long ago that the preferred method of team-building seemed to be loading up on pitching, then concentrating on pitching, followed by adding more pitchers. That seems to be changing and, coincidence or not, the Phillies find themselves on the cutting edge of this evolution.

“I don’t view [spending big on three hitters since last year’s Draft] as a trend,” general manager Matt Klentak said. “But I will say that oftentimes the best hitters come from the top of the Draft. If you study baseball history, you’ll probably find that there’s some truth to that.”

Is it getting harder to find good hitting?

“Throughout baseball history, the game has ebbed and flowed,” he continued. “We’ve had dead-ball eras, live-ball eras, steroid eras. Right now we’re going through an era that seems to be more dominated by pitching and defense. Certainly, the defensive shifting is suppressing run scoring. So, not just the Phillies, but all teams, are refocusing on their commitment to offense and different ways to add offense.

“No matter what era this was, we probably still would have taken Mickey Moniak, but I do think there’s some truth to the idea that teams are desiring to add offense.”

Alamaraz sees the same thing. “As far as amateurs are concerned, yes, it’s getting tougher every year,” he said. “Position players, there’s a smaller pool of them and it’s tough to get them. So if you don’t get them early you’re probably not going to get them at all.”

There is hope, then, although it must be pointed out that Moniak, Randolph and Ortiz aren’t going to be leading a cavalry charge down Broad Street any time soon. All are teenagers, so it will be at least a few years before they’re ready to make an impact at the big league level. There are also no guarantees any young player will develop in the ways scouts envision.

But the commitment the organization has made gives the team a chance to be ahead of the curve down the road, especially if offense continues to become an increasingly precious commodity.

It’s not just the Big 3, either. The Phillies’ third pick this year was infielder Cole Stobbe, considered a plus hitter. A year ago they took second baseman Scott Kingery in the second round and third baseman Lucas Williams in the third, two more high-ceiling bats.

“As people who watch the game every day know, if you have a lineup capable of hitting in certain counts and making hard contact, you have a chance to score runs,” Alamaraz said. “I’m not the type of scouting director who likes players who swing and miss. I like guys who make consistent hard contract and that’s what we’re going after.”

The Phillies have invested in hitters the last couple years. Pitching may still be the name of the game. But as many teams are learning the hard way, it still takes some offense to win.