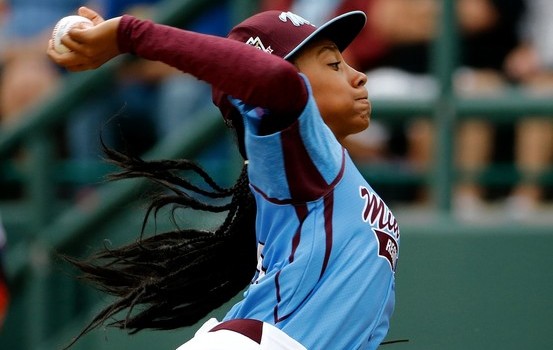 MO’NE WOULD LIKE TO PLAY POINT GUARD FOR UCONN

Philly’s Mo’ne Davis, who became the breakout star of this year’s Little League World Series when she threw a complete-game shutout for her Taney Dragons in youth baseball’s pinnacle event, revealed last week what she really wants to do when she grows up: play point guard for Connecticut’s women’s basketball team.

“Geno has to know that,” she said.

Geno is Geno Auriemma, the legendary UConn coach, actually reached out to Davis after her comments—which, as it turns out, wasn’t a violation of NCAA recruiting bylaws.

In its rule book, the NCAA defines “prospective student-athletes” in women’s basketball as students who have started classes for ninth grade. Davis, 13, will enter eighth grade in the fall. Davis struck out six but allowed three runs on six hits, in only 21/3 innings, as Taney was eliminated by Las Vegas Wednesday night, 8-1.