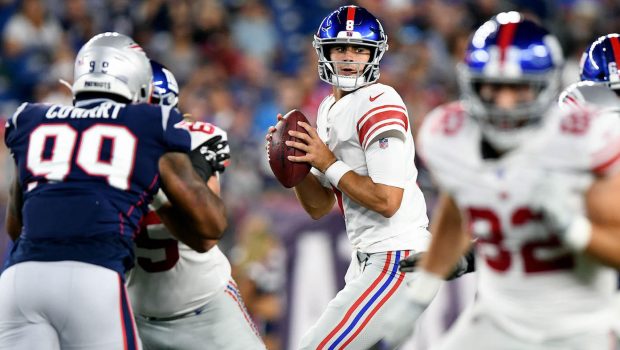 Just when you thought there was no way the Eagles would have to plan to face the New York Giants rook QB Daniel Jones:

Giants coach Pat Shurmur opened the door slightly for Jones, who has a high ankle sprain, to play Monday night at the Linc:

‘Very slim’ chance Daniel Jones plays because he is not practicing, Shurmur says. Optimism he could return this season. #giants</stro
Shurmur did say even if Jones can’t go this weekend, he does believe he can return some point before the season ends.

If Jones can’t go, it will be Eli Manning who starts and he is working at getting in a good rhythm with his wide receivers.

“Obviously we’ll see what happens Monday,” Manning said after taking the first-team snaps at practice via ESPN. “But business as usual in a sense get the game plan, start prepping for Philly. Going against a good defense, but also a defense we faced a number of years. Know ’em well. Just get back into the mix with the offensive line and receivers. Make sure the timing is where it needs to be.”

Jones was able to play through a high ankle sprain last year with the Duke Blue Devils and he is confident that he is going to be able to return. He said every day that goes by he is feeling a little better.

“I think they’re good,” Jones said. “Every day since, I’ve been feeling better. I think it should heal up pretty quickly.”