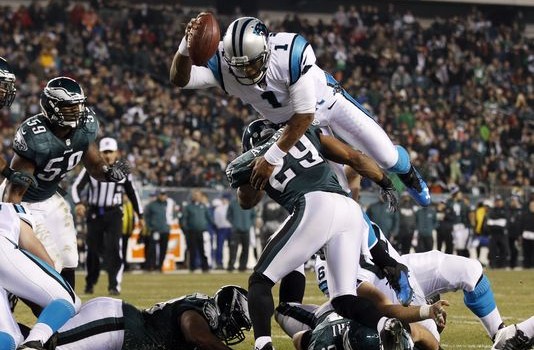 MONDAY, MONDAY — BANGED UP BIRDS VS. PANTHERS AT THE LINC

In the soap opera that is the National Football League, nothing lasts forever, and the Eagles will be without their starting QB and defensive captain when they meet the Carolina Panthers next Monday night at the Linc.

They turned to former New York Jet castoff Mark Sanchez after starter Nick Foles suffered a broken clavicle in the first half of last Sunday’s win over Houston. Foles reportedly does not need surgery and may be able to return in six weeks.

Sanchez completed a 52-yard pass to Jeremy Maclin on his first play in nearly two years and finished 15 of 22 for 202 yards, two touchdowns and two interceptions.

”He’s already ready, he’s always focused and always prepared to make plays and that’s part of his makeup,” coach Chip Kelly said. “That’s what we really liked about him.”

There had been rumblings about a change even before the injury. After finishing with 27 touchdowns and two interceptions while the Eagles won the East in 2013, Foles has thrown for seven scores with eight picks in his past five games.

Now Sanchez will make his first start since Dec. 30, 2012, after missing last season because of a torn labrum in his right shoulder. Including the postseason, Sanchez owns a 37-31 career record as a starter with 77 scores and 72 picks.

‘He plays at a high level,” said Maclin, who has 18 catches for 345 yards and four touchdowns in his last two games. “I think he is one of the more game-ready backup quarterbacks in this league.”

Although they lost to visiting New Orleans in the playoffs last season, the Eagles have won eight straight regular-season home games – their longest run since an 11-game streak from 1991-93.

They’ll also have to play without middle linebacker DeMeco Ryans for the rest of the season after he tore his right Achilles tendon on Sunday. Casey Matthews is expected to replace Ryans, who has a team-high 45 tackles.

Right guard Todd Herremans is also out for the season and will have surgery to repair a torn biceps. All-Pro left guard Evan Mathis, though, has been activated off short-term IR and will play for the first time since injuring his knee in Week 1.

The Eagles, fourth in both points (29.3) and total yards (409.3) per game, hope to maintain that production against a Carolina defense that has hardly resembled the unit that keyed a 12-4 finish last season.

The Panthers have allowed 30.7 points per game since Week 3 – 31st in the league – while going 1-5-1. They’ve been particularly vulnerable against the run, allowing 134.8 per game in their last four.

That doesn’t bode well heading into a matchup with LeSean McCoy, who has picked it up with 349 yards on 5.3 per carry over his last three games following a slow start.

Making matters worse, Carolina’s Greg Hardy is appealing his July 15 conviction on charges of assault on a female and communicating threats, and that trial has been moved to 2015. The defensive end has been placed on the exempt-commissioner’s permission list and cannot play until the matter is resolved.

”I’ve been in a race like this before, we all have,” he said. “It ends up being the team that comes back, that gets up and keeps fighting. The next thing you know, you’re right in the thick of things.”

Rivera hopes to have linemen Byron Bell, Amini Silatolu and Trai Turner back after all three sat with injuries against the Saints. A healthy front should help Cam Newton get the ball to playmakers Greg Olsen and Kelvin Benjamin, who have accounted for 10 of Carolina’s 12 touchdowns through the air.

Newton will try to rebound after completing a career-worst 10 of 28 passes for 151 yards with one interception against the Saints. He’s thrown one pick in each of the past five games and hasn’t tossed a TD in his last two.