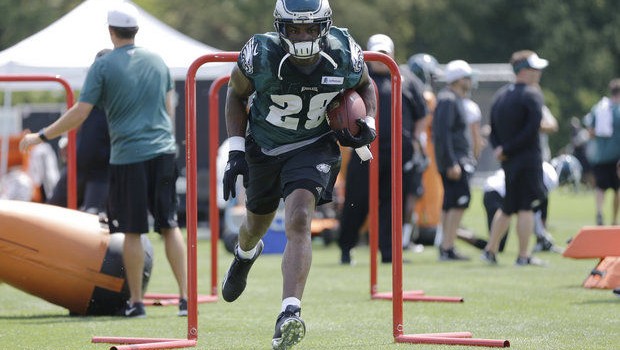 IF IT’S MONDAY, EAGLE MURRAY IS BACK ON THE PRACTICE FIELD

At Sunday’s first day of Eagle straining camp, running back DeMarco Murray was held out of practice.

On Monday, following the team’s second practice, Murray addressed his absence — and made it clear it wasn’t his call.

“That’s how it goes,” Murray said. “I don’t know whose decision it was. I was trying to do as much as I could.”

In Murray’s place with the first-team offense on Sunday was Darren Sproles, who is projected to be third on the depth chart. With Murray holding his helmet, many speculated an injury was holding him back, a theory the running back shot down on Monday.

Although he said it with a smile, Murray didn’t seem too pleased with it.

“Yeah you are always upset when you don’t get a chance to get out there and compete,” Murray said. “Obviously I wanted to be out there, but it didn’t happen.”

Murray said he wouldn’t be talking to coaches in search of an explanation.

“I just do what I’m told,” Murray insisted.

The good news for Murray is that his reps did increase on Monday, and was out with the first-team offense during both seven-on-seven and 11-on-11 drills.

“Some guys get more reps one day,” Murray said, “and another day another guys gets more reps.”