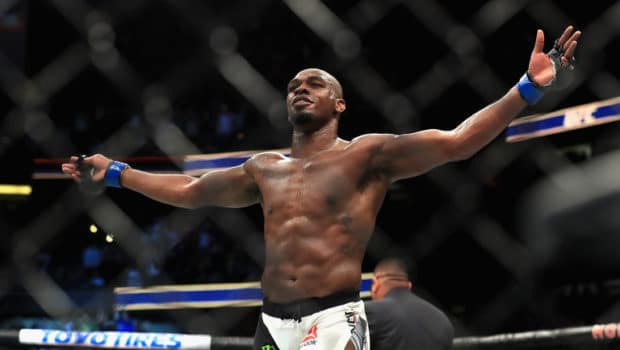 Jon Jones reached the pinnacle of mixed martial arts and then fell harder than just about anyone ever had before.

When he got back on top last night in Anaheim by stopping his greatest rival in dramatic style, Jones vowed to appreciate everything he had lost and regained.

Jones reclaimed his UFC light heavyweight title by stopping Daniel Cormier in the third round with a vicious head kick and a finish on the ground at UFC 214, completing his rocky journey back to the top after 2 1/2 years of drama with his 14th consecutive victory.

He fended off a stiff challenge from Cormier (19-2), who held the belt for most of the past two years while Jones (23-1) dealt with self-inflicted setbacks outside the cage. His title belt has been stripped twice, and he endured a yearlong suspension for a doping test failure before returning to beat Cormier for the second time.

“I feel like I’m leaving my past behind me and I’m erasing everything I’ve done before,” Jones said. “I feel like this is a step to a new career, a new championship, and I want to be a better champion than I was in the past.”

After 2 1/2 rounds of even, high-level striking, Jones landed a left head kick that caught Cormier leaning in. The champion staggered backward and then around the cage with Jones in pursuit, and Jones finished the fight on the ground with a series of merciless strikes.

Jones was widely considered the world’s top pound-for-pound mixed martial artist while he held the belt for nearly four years from 2011-15. He beat Cormier by clear decision in their first bout in January 2015, but had fought just one time since.

In contrast to the combative nature of their public dialogue over the past three years, Jones praised Cormier afterward.

“I want to thank Daniel for being my biggest rival and my biggest motivator,” Jones said. “He has no reason to be ashamed. He has been a model champion. I aspire to be a lot more like that man, because he’s an amazing human being.”

Jones also called out former UFC heavyweight champ Brock Lesnar for what would almost certainly be the highest-profile fight in MMA history.

Jones lost his belt in early 2015 for his involvement in a hit-and-run accident in which a pregnant woman’s arm was broken. In July 2016, Jones was pulled from a rematch with Cormier for his drug test failure.

Cormier reigned atop the division for most of Jones’ absence, but he realized his glittering title belt was affixed with an enormous asterisk. The 39-year-old ex-Olympic wrestler has been trading verbal shots with Jones ever since one of the best rivalries in MMA history was sparked by their brawl in a casino lobby during a promotional appearance in 2014.

Cormier apparently incurred a concussion during their rematch. He cried in the cage afterward.