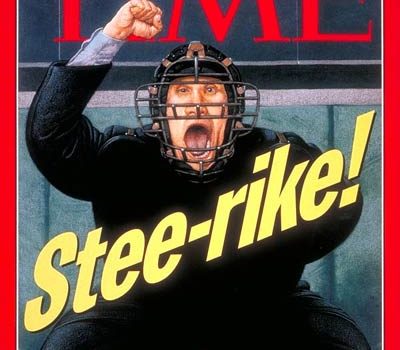 MLB TEETERING ON THE BRINK OF FIRST STRIKE SINCE 1994

The last time Major League Baseball came this close to a work stoppage — 1994 — it ended badly for the sport and for the fans.

Following that labor shutdown, it took Mark McGwire and Sammy Sosa to juice the game back to life in 1998.

And how did that turn out?!

Baseball didn’t return for 232 days. The strike canceled the rest of the 1994 season, and for the first time since 1904, even the World Series.

“I never felt the same way about baseball again after that,” Dave Stewart, a four-time 20-game winner and then pitching for the Toronto Blue Jays, told USA TODAY. “Even today, after all of my years in baseball, the passion I have for the game has never been the same. All because of that strike.

“It was one of the most embarrassing moments that’s ever happened to Major League Baseball. I wish I had never come back.”

Stewart stayed around for another three months once baseball returned in April 1995, back with the team for which he had his best years, the Oakland Athletics. He then retired after 19 seasons, before becoming an assistant general manager, a pitching coach and now an agent.

Yet for so many others, from Hall of Famer Goose Gossage to Bo Jackson to Sid Bream to Lloyd McClendon, they never would play another major league game.

“The strike got me, man,” Gossage told USA TODAY Sports. “It got a bunch of us. We faded in, and we faded out.

“You don’t leave the game. The game leaves you.”

Gossage and former pitcher Charlie Hough are the only two players in baseball history who endured all eight work stoppages, while many of today’s greatest stars, such as New York Yankees shortstop Derek Jeter, never have lived through one.

“Most of these guys in the big leagues today,” Gossage says, “they don’t have any freakin’ clue on how they’re being paid all of this money. Not one clue. They have no idea the blood, sweat and tears we went through.”

Gossage’s Hall of Fame career began with a strike as a rookie in 1972 with the Chicago White Sox and ended with the 1994 strike with the Seattle Mariners, with six work stoppages in between.

“They were all ugly,” Gossage says. “The owners always tried to stick it to us, but we weren’t going to let them break that union. We didn’t have the money like the guys today. When I made the White Sox as a rookie, I was literally broke.

“I remember getting to Chicago, opening day was the next day, and we went on strike. I was just a kid. I didn’t have a credit card. I had no place to stay. No money for a hotel room. I remember going to Joe Pepitone’s bar. He bought me some beers, and I wandered the street all night.

“That’s what it was like back in those days.”

By the time 1995 rolled around, the strike gave players an option most never had considered.

“It makes you kind of sick to think about everything that could have been,” says Gossage, who pitched three scoreless innings and was the winning pitcher his final game. “It wasn’t that I wanted to go out on my own terms. I’d rather make an ass of myself try to play another year or two than ever leave the game early.

“I wanted keep playing this game until they tore my uniform off. The strike tore it off for me.”

Now, after eight work stoppages in a 22-year span, baseball has had 20 consecutive years of labor peace.

“It would have been a damn shame if baseball didn’t learn from that,” Gossage says. “Hopefully, no one ever again has to experience what we went through.