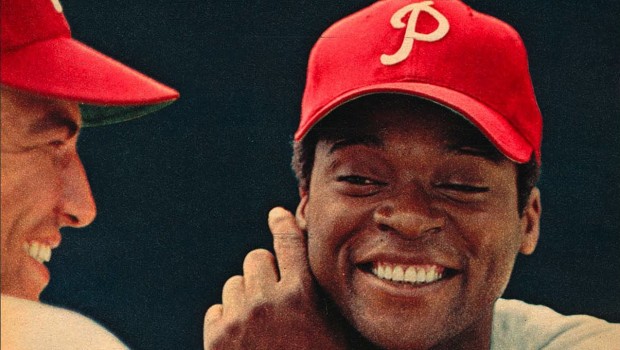 It’s nice to know that MLB.com columnist Hal Bodley has joined our own Art Beitchman and thousands of others in the belief that former Phillie Richie Allen should be in the Hall of Fame when the vote is taken next month.

Bodley saw a lot of Allen’s salad days when he worked as a sportswriter in Wilmington, so we are glad he has joined the chorus and his opinion may have some weight with the voters.

Here is an excerpt of what he wrote:

For openers, I’ve never seen a player hit a baseball consistently as far or as hard as Dick Allen did with his beautiful, menacing swing. And I’ve never seen a rookie season comparable to the one Allen put in the record books in 1964.

That said, few players have been so vulnerable, or so adept, at creating controversy.

Allen, now 72, is one of 10 candidates on this year’s Golden Era ballot for the Hall of Fame. A 16-member panel of Hall of Fame players and managers, former executives and baseball writers will vote at the Winter Meetings in San Diego. An announcement on the committee’s decision will be made on Dec. 8. Seventy-five percent of the vote is required for induction.

His stats among players with 7,000 or more plate appearances are very similar to Hall of Famers Frank Thomas and Willie Mays.

Of the nine players on the ballot, Allen’s credentials are the best. Former executive Bob Howsam, who built World Series championship teams in St. Louis and Cincinnati, is also a candidate.

During Allen’s 15 years (1983-97) on the Baseball Writers’ Association of America ballot, his best year was ’96, when he received just 18.9 percent of the vote with 75 percent needed for induction into Cooperstown.

The Golden Era was one of three periods established by the Hall of Fame when, in 2010, it divided the former Veterans Committee into the Pre-Integration Era (pre-1947), the Golden Era (’47-72) and the Expansion Era (’73 and after).

Allen is hurt by the fact his career was relatively short (1963-77), and he missed many games because of injuries and other issues.

He retired at the age of 35 after playing for five teams with a lifetime .292 batting average and 351 home runs.

After a few games in 1963, “Richie” Allen arrived with the Phillies full time in ’64. I covered the Phillies during his entire career with them. Memories are vivid.

I just completed my 56th year as a baseball writer, but 1964 stands out, and Allen was a huge reason why.