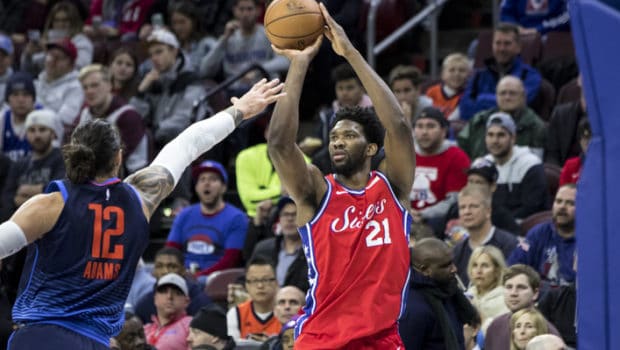 In case you hadn’t noticed, the Sixers look like a playoff-bound team with Joel Embiid.

Without him, they resemble a collection of talented stumblebums.

Wirness last night’s 114-109 loss to Toronto, which Embiid missed because of a sore back after feeling much better early in the day.

The Sixers are now 1-7 when Embiid sits.

He is one of the NBA’s most dominant players when healthy, and his absences provide some traction for the ridiculous notion that they save Embiid for national television games.

Embiid played 49 minutes in a triple-overtime loss to the Oklahoma Thunder last Friday (above). He played 39 minutes in a Dec. 12 win over the Minnesota Timberwolves. Both games were shown on ESPN. The 76ers will play the New York Knicks on Christmas day on ESPN.

Embiid’s injury history is well documented. He missed all of his first two seasons and played in just 31 games last season.

“I do this every year,” Brown said of preparing for a game with Embiid’s status unknown. “You rip up your play call sheet. It’s life here in Philadelphia with the injuries we’ve had. Life moves on, and it’s Christmas.”