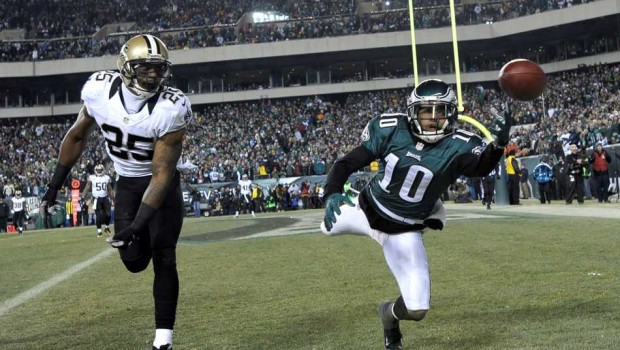 MISSING D-JAX AND THE SPECIAL ATTENTION HE ATTRACTED

The overarching question in Eagles training camp relates to how much DeSean Jackson will be missed.

Some believe QB Nick Foles, after a terrific season, will have a harder time finding passing options because defenses often ganged up on Jackson, who was cut in March and is now playing in Washington. Or that Riley Cooper’s best season so far (47 receptions for 835 yards and eight touchdowns in 2013) was a byproduct of the double-teams that dogged Jackson and created space for the other Eagles playmakers.

“No one is going to play us in two‑deep because if you play us in two‑deep, we can run the heck out of the ball. We had everybody as close to the line of scrimmage as possible and nobody was helping anybody. They were trying to stop the run game.”

Jackson had his best NFL season in 2013, his first season in Kelly’s system, hauling in 82 receptions for 1,332 yards and nine touchdowns.

“We didn’t double-team [Jackson] but we always had an eye on him. We knew that he can stretch the field at any given time” former Saint Malcolm Jenkins said.

But Jackson’s numbers can be a bit misleading. He had as many games of more than 100 receiving yards (five) as he did games of fewer than 40 yards. In those games in which Jackson struggled, the Eagles still managed a 3-2 record.

While it still remains to be seen how the Eagles will stretch the field without Jackson, Eagles safety Jenkins seemed to back up Kelly’s claim when he discussed how the Saints defended Jackson.

“We didn’t double-team [Jackson], but we always had an eye on him,”Jenkins said. “We knew that he can stretch the field at any given time, so our deep defenders always needed to know where he was at. Was he in the backfield, in the slot or out wide?

“He demands your attention, [and] we might cheat a safety over to his side but never truly double-team him.”

Over the off-season, the Eagles replaced Jackson and Avant with Jordan Matthews and Josh Huff. They’re rookies, but Matthews and Huff will be asked to produce in the offense and both could create mismatches in the slot against smaller cornerbacks and linebackers.

Even without Jackson, the Eagles have plenty of weapons in running backs LeSean McCoy and Darren Sproles, receivers Jeremy Maclin and Cooper, and tight ends Zach Ertz and Brent Celek. In Kelly’s second season, the offense likely will spread the ball around in the passing game, rather than focus mostly on one receiver, as it did with Jackson last season.