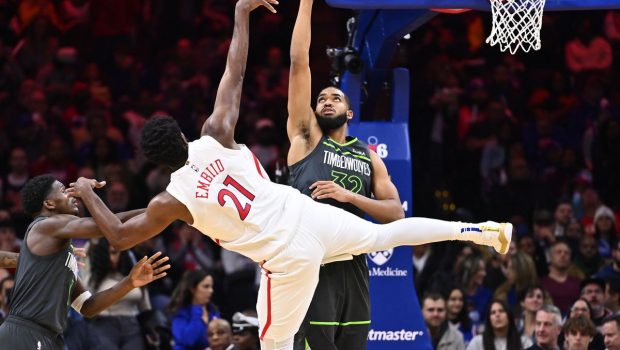 Anthony Edwards scored 25 points and D’Angelo Russell 19 and the Minnesota Timberwolves survived a late scare for a 112-109 win over the undermanned Sixers.

The 76ers missed starter Tobias Harris with a bad hip, have already played without James Harden for two weeks because of a right foot tendon strain and they added starting guard Tyrese Maxey to the injury list with a broken left foot suffered Friday. P.J. Tucker suffered an unspecified injury against the Timberwolves and Joel Embiid injured his left ankle/foot following a late-game collision with a teammate.

Embiid, the reigning NBA scoring champion, said well after the final buzzer he was still in pain and he hobbled off the dais following his press conference.

Maxey and Harden averaged 20-plus points on the season, and their losses left Embiid to carry the load among a lineup that in one stretch included him, Danuel House Jr., De’Anthony Melton, Shake Milton and Georges Niang.

“No one feels sorry for you. So I’m not going to feel sorry for us either,” coach Doc Rivers said. “We’ve got to find a way to win. I know that sounds nuts. But we just have to. And we’ll figure it out.”

Without two top scorers, the Timberwolves pounced early on the Sixers and stretched a winning streak with all three wins on the road. They won at Cleveland, Orlando and moved to .500 at 8-8.

“We’re not in a position where we feel like we can afford any letdowns,” Timberwolves coach Chris Finch said. “We’re just starting to play well ourselves.”

Embiid gave the Sixers a scare with 5:33 left in the game when he tripped over fallen teammate Georges Niang and crumbled to the court. Embiid rolled his left ankle and lay on his back as he was checked out by a trainer.

Embiid hobbled to the bench but stayed in the game. He limped the rest of the game and hit the court again — on a steal and then he followed with a 3 that pulled the Sixers to 105-102.

Edwards buried a 3 that stretched the lead to six.

Melton, though, hit a 3 with 30 seconds left that inched the Sixers within one but he missed a driving layup in traffic on the next possession that was their best last-gasp effort to complete a comeback from 20 points.

Niang airballed a desperation 3 at the horn.

“Sometimes the clock in your head goes faster than what you actually have,” he said

“We were able to hold on, make enough shots, make a couple of big plays to win a game like that,” Finch said. “It shouldn’t have come down to that.”