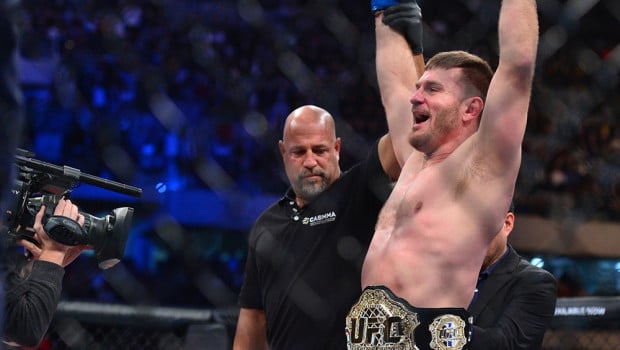 Stipe Miocic knocked Fabricio Werdum cold Saturday in the main event of UFC 198 in Curitiba, Brazil, catching Werdum with a right hand on the chin, finishing him at 2:47 of the first to bring the UFC heavyweight title back to his hometown of Cleveland.

Werdum was moving forward, chasing Miocic, who was back-pedaling in an effort to create distance. Miocic fired a short right at Werdum that landed squarely on the chin. Werdum fell face first and it was quickly over.

Referee Dan Miragliotta jumped in to stop it, handing Miocic, a one-time wrestling and baseball star at Cleveland State, the heavyweight title.

“Fabricio Werdum is tough, [and] he had me guessing,” Miocic said. “I trained hard, man. He’s quicker than I thought. He was catching me off guard. It was a good shot.”

Miocic, who is one of the finest athletes in the UFC, was relaxed throughout in the biggest fight of his life. Werdum, who has had notable wins over Fedor Emelianenko, Cain Velasquez, Mark Hunt, Travis Browne, Antonio Rodrigo Nogueira, Alistair Overeem and Roy Nelson, was moving forward and attacking, but Miocic never got flustered.