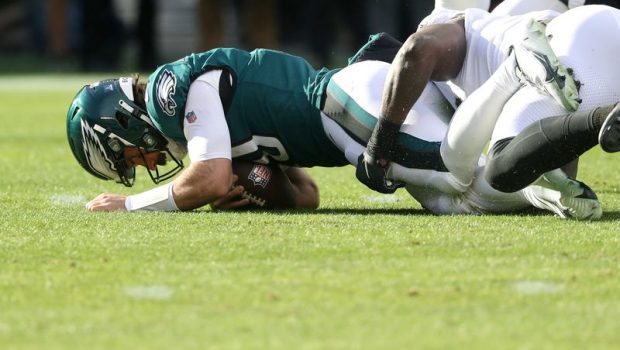 The once-mighty Eagles lost their second straight game, 20-10 to the New Orleans Saints at the Linc.

The Eagles need to win their final game of the season against the New York Giants at home in order to wrap up the top seed and win the division.

They can also do that with a Cowboys loss to the Commanders next week and the Vikings have to lose once, to either the Packers, who played later Sunday afternoon, or to the Bears next week.

The Eagles suffered a frightening injury to one of their sack artists with Josh Sweat having to be taken off on a cart with 9:19 to play in the first quarter. Sweat, who has 11 sacks, was taken to a nearby hospital for precautionary reasons. The good news is he had movement in all his extremities.

The Eagles’ defense collected seven sacks and now has 68, which is six away from the league record of 72 set by the 1984 Chicago Bears.

It is their fifth straight game with at least six sacks.

Haason Reddick and Brandon Graham each had two and now have 16 and 11, respectively; Javon Hargrave had one to give him 11; Fletcher Cox got his seventh of the year; and Milton Williams and Ndamukong Suh shared one.

He was sacked five times in the first half – six times in the game – and couldn’t lead the offense to its initial first down until 12 seconds remained in the second quarter. The Saints, who moved to 7-9, meanwhile, were busy building a 13-0 lead at the intermission.

The Eagles had just 11 first downs.

Minshew did have his moments, like the 78-yard TD pass he uncorked to A.J. Brown down the right sideline. Brown hauled it in and outran three defenders for about 33 of those yards into the end zone to make the score 13-10 with 45 seconds left in the third quarter.

Penalties also hurt the Eagles, with at least four false starts, a holding call that took a 28-yard TD run away from Boston Scott, and a Jason Kelce ineligible man downfield penalty to wipe away a big gain on a short throw to Scott.

The holding on Dickerson looked like a well-executed pancake block.

The Eagles had a chance midway through the fourth quarter to keep a drive a live, but on a fourth-and-one quarterback sneak try from Minshew at midfield was stuffed.

The Eagles’ defense held the Saints to a three-and-out at midfield, but the game was sealed when Minshew threw a pick-six, with Marshawn Lattimore stepping in front of A.J. Brown for an easy 11-yard touchdown return to make the score 20-10 with 5:27 to play.

It was Minshew’s third interception in his two starts.

The running attack, without Hurts, struggled again, with Miles Sanders getting just 61 yards on 12 carries. As a team, they ran just 15 times for 67 yards.