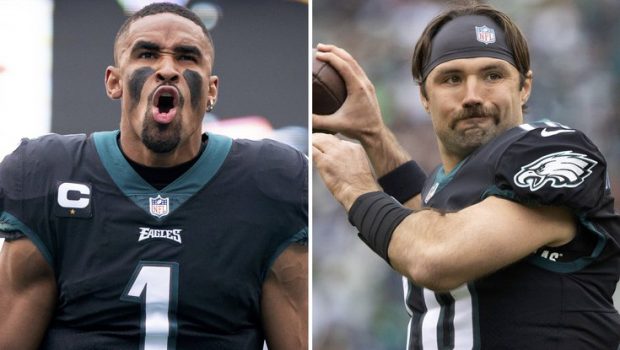 WOEFUL MINSHEW PROVED JUST HOW VALUABLE HURTS IS TO EAGLES!

Gardner Minshew played like a dog yesterday, “leading” an Eagles offense that scored all of 10 points.

He also somehow got sacked six times and threw a pick-6 that clinched the Saints win.

The offense was putrid to start the game, going four straight possessions with three-and-outs to start.

Minshew missed plenty of throws, failed to convert a quarterback sneak in the fourth quarter, and threw a pick-six to Marshon Lattimore that essentially sealed the win.

The Eagles (13-3) can still clinch the NFC East and home field next week — and they will have Jalen Hurts back (he was sorely missed in this game). James Bradberry said it best after the game — they would have preferred to wrap things up this week.

Which clarifies our thinking about how valuable the injured Jalen Hurts really is.

You could argue, and many will, that Hurts’ value is accentuated by the Eagles losing both games missed by Hurts with his shoulder injury.

I can’t argue with that, except to say I cannot vault a player who doesn’t play over an extremely valuable player who continues to play.