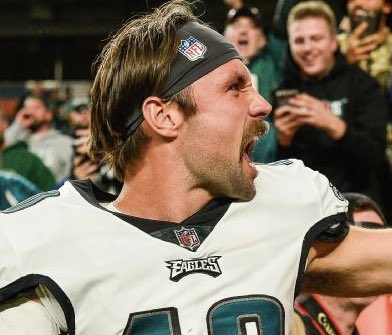 MINSHEW PLAYS LIKE A STARTER, AND EAGLES GO 6-7 BEFORE THE BYE!

But, given the lukewarm support starter Jalen Hurts has gotten from the Eagles front office, don’t be surprised if there are calls for Minshew to be the starter in the future.

He executed a flawless performance in a 33-18 victory over the New York Jets at MetLife Stadium, and he finished 20 of 25 for 242 yards and two touchdowns (133.7 rating), led the Eagles to scores on their first seven offensive possessions against a Jets defense ranked amongst the worst in the NFL.

Minshew, filling in for an injured Hurts (ankle), had a dominant first half that got the Eagles’ offense going before their defense settled in. He completed his first 11 passes in the game for 166 yards and two touchdowns to start the game. Minshew found Dallas Goedert twice for touchdowns in the first half, as Goedert had five catches for 98 yards in the opening 30 minutes. Kenny Gainwell also had an 18-yard touchdown run that gave the Eagles a 21-18 lead with 4:30 remaining in the second quarter — one they wouldn’t relinquish. In the first half, Minshew was 14 of 15 for 188 yards and two touchdowns for a perfect 158.3 passer rating — sparking the Eagles’ offense to a much-needed victory to stay in the NFC playoff race.

The Jets scored on their first three possessions, but kicker Alex Kessman, who was promoted to the active roster this week, missed his first two extra points in the game. New York went for two on its third touchdown, but the pass attempt was incomplete. Zach Wilson, who hadn’t thrown a touchdown pass in the first half all year, had two touchdown passes in the opening 30 minutes. Elijah Moore had a touchdown catch, his sixth in the last seven games.

Philadelphia’s defense shut down New York in the second half, forcing an interception and a turnover on downs as the Jets went scoreless on three second half possessions. The Eagles controlled the time of possession, rushing for over 175 yards for the sixth consecutive game — the first time the franchise has done that since 1949. Miles Sanders led the Eagles rushing attack with a career-high 24 carries for 120 yards. Goedert had six catches for 105 yards and two touchdowns in the victory. Philadelphia scored 19 unanswered points to close the game.