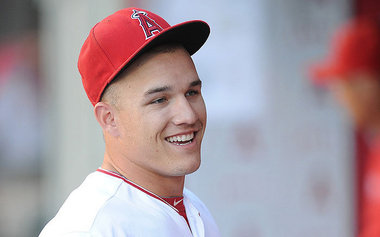 MIKE TROUT IN TOWN — WITH THE ANGELS

The highest-profile hitter in baseball makes his debut in Philly, a town where many fans wish he were a hometown hero

When the Angels play on Tuesday in Philly, Millville, N.J., will be pretty much empty.

“I guess lock the doors in Millville,” Mike Trout said with a chuckle.

A large portion of the town will be at Citizens Bank Park for Millville Night, which the residents more likely view as Mike Trout Night.

And many Phillies fans feel that every night should have been Millville Night since they blame the Phillies scouts for not recognizing this great player who grew up so close to Citizens Bank Park.

“It’ll be crazy,” Trout said before the Angels finished their first stop on the trip with a 7-3 loss to the Toronto Blue Jays on Monday.

Trout has played in Baltimore, Washington and New York, which are all close enough for his friends and family to make the trek. But this will be his first time — a once-every-six-years interleague opportunity — to play in the ballpark just 45 miles from his hometown.

This two-game series has no doubt been circled on the schedule in Trout’s head ever since the dates were released last September.

“I’m excited,” Trout said. “It’s good to go home. Just to see some faces in the stands you haven’t seen in a while will be cool.”

Busloads of fans, thousands of them, are expected to make the trek up to see Trout. He has a scheduled news conference to handle all the media requests.

Unfortunately for him, the Trout Comes Home story has a sidebar these days. It’s What’s Wrong With Trout’s Swing?

Although he drove in two of the Angels’ three runs with a double Monday night — his second straight two-RBI game — he is still in the midst of a 6-for-43 (.140) slump, with 15 strikeouts.

“I’m swinging through some pitches right down the middle,” Trout said. “I’m just a tad late. Just trying to do too much, swing too hard. I just have to trust myself, trust my hands and go from there. Things will turn around.”

Manager Mike Scioscia said he would think about giving Trout a day off — not in Philadelphia, don’t worry — if he felt he needed a mental break, but so far he doesn’t.

“Mike is still very confident in what he can do,” Scioscia said. “I don’t think there’s a level of frustration that would warrant a mental day off.”