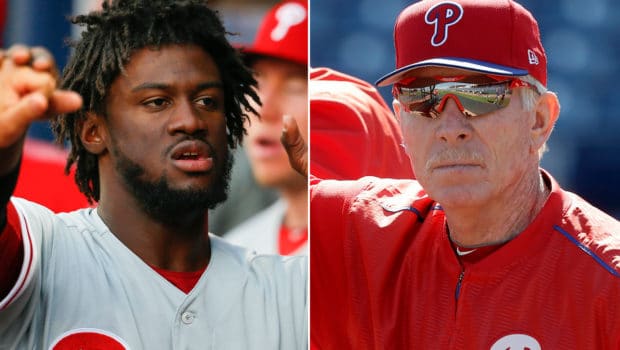 There are many reason Mike Schmidt is regarded as a god by Philly sports fans:

He is considered the greatest third baseman ever in the history of major league baseball.

Schmidt said yesterday that he wouldn’t build a team around current Phillies outfielder Odubel Herrera because, before anything else, he isn’t a native English speaker.

Here’s Schmidt, who doubles as a Phils broadcaster on the weekends, on 94WIP after being asked if Herrera is the type of player he would build a team around:

“My honest answer to that would be no because of a couple of things. First of all, it’s a language barrier. Because of that, I think he can’t be a guy that would sort of sit in a circle with four, five American players and talk about the game. Or try and learn about the game or discuss the inner workings of the game. Or come over to a guy and say, ‘Man, you gotta run that ball out.’ Just can’t be — because of the language barrier — that kind of a player.”

So, applying Schmidt’s own logic to the team-building process he’d also take a pass on building a team around — off the top of my head — Roberto Clemente, Miguel Cabrera, Manny Ramirez or Ichiro.

Schmidt’s thinking ignores convenient facts like 1) WAR and slash lines being a universal language or 2) the diverse nature of baseball means there will always be other teammates around who speak your language and might be in need of a batting tip or ‘no bueno‘ after slagging it down the line. The Phillies have more than their fair share of Hispanic players on the roster.

Now, there are valid reasons to believe that Herrera isn’t the cornerstone the Phillies believe him to be after handing him a six-year, $30 million contract extension. The 25-year-old’s start to the 2017 season has been poor: Two months of severe slumping followed by a recent rebound at the plate.

“Odubel can be — you see what he’s doing the last three days and we saw the inconsistency that dropped his batting average all the way down to the low .200’s prior to the last three games, and that’s really the first time we’ve seen that kind of inconsistency from him.”

Schmidt then went on:

“However, he’s more of a sort of, play the game, allow his exuberance for the game to kind of spread around the team. I think the fans love him. He’s not afraid to do things that sort of irk the other team if you will, and you know what that is. I probably would hate him if I played against him because of his antics on the field, but he’s not afraid. He’s not afraid to do that. He’s learning to play a really good centerfield. They haven’t figured out where he needs to hit in the batting order yet.

Just where do you stand, Mike?

“To answer your question, those are the reasons that I don’t think you can build a team around him. Now, I truly think he can hit second or first on a championship team. There’s no question about that.”