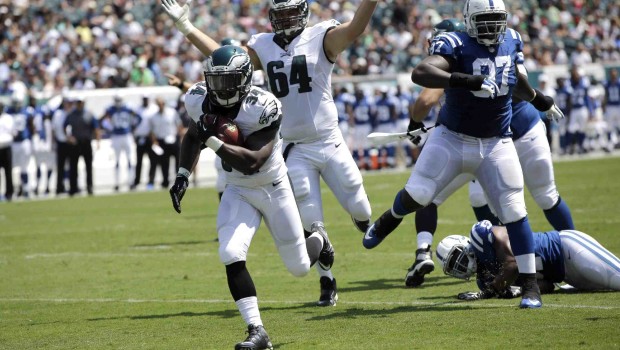 PUTTING THE EAGLES’ 36-10 BLOWOUT OF INDY UNDER A MICROSCOPE

Kenjon Barner’s 92 yard punt return was a thing of beauty as he looks to make the team as a returner and fourth-string running back.

The long-awaited 2015 Eagles preseason season got underway Sunday, and the Birds blew away the Indianapolis Colts 36-10.

Sam Bradford, Kiko Alonso, DeMarco Murray sat out game 1, but the guys who played were impressive.

QB Matt Barkley looked good, throwing 12-20 for 192 yards, his best game action anybody can remember — perhaps feeling the hot breath of Tim Tebow on his neck.

First round draft pick Nelson Agholor was very impressive in his initial NFL action, pulling in 3 catches for 57 yards, including a 34 yard touchdown. Algholor also displayed some nice YAC (yards after catch), abilities, bolting up field with some nice burst, could have a big rookie year.

Secondary play was also under a microscope with all the off-season changes, and it appeared to be much better. Rookie Eric Rowe sparkled with a forced fumble in his first NFL action, creating an Eagles turnover, Rowe will get a long and hard look in the nickel package that’s up for grabs with departure of Brandon Boykin.

Second year safety Ed Reynolds had a big game with two interceptions, looking to gain a roster spot on the final 53.

No injuries were reported from the Colts game, which is also a huge plus going into a week 2 of exhibition games. A joint practice with the Baltimore Ravens will be held at the NovaCare complex this week, before the next preseason game at the Linc August 22 at 7pm versus the Ravens.