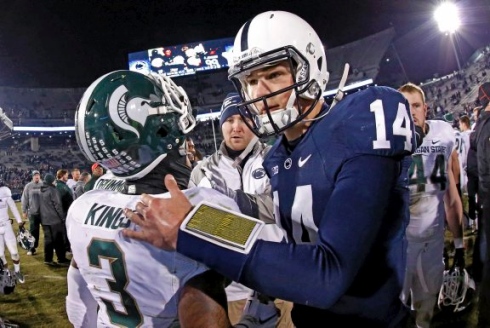 PENN STATE HONORS 17 SENIORS WHO COULD HAVE LEFT BUT STAYED

It was senior day at Beaver Stadium, a chance for Nittany Nation to pay tribute to the players who have endured the three seasons since the Jerry Sandusky scandal sent this proud program into a tailspin.

Players were celebrated before the game, the fans cheered, photos were taken.

That was the highlight of Nittany Lion football on this last Saturday in November.

The Spartans (10-2, 7-1 Big Ten, No. 10 CFP) won their third straight game and hit the double-digit win mark for the fourth time in the last five seasons under coach Mark Dantonio. The Spartans have four of their six 10-plus win seasons in school history under Dantonio.

Shelton doused the enthusiasm of the emotional senior day festivities at Beaver Stadium when he used all of 14 seconds to dart through defenders for the score.

From there, the Spartans never really dazzled against the Nittany Lions (6-6, 2-6). Connor Cook threw a 10-yard TD pass and Langford chipped in with a 3-yard score in the third quarter to methodically put it away.

The Nittany Lions honored the 17 seniors who weathered four coaches, the Jerry Sandusky child sex abuse scandal and the resulting NCAA sanctions. The NCAA lifted the bowl ban this season and the Nittany Lions await their destination.

Under first-year coach James Franklin, the Nittany Lions finished 2-6 after a 4-0 start.

Christian Hackenberg (photo above), the quarterback predicted for NFL stardom under former coach Bill O’Brien, has sputtered on Franklin’s watch. He has been sacked more than 40 times behind an oft-maligned offensive line and threw 15 interceptions, the kind of numbers that sour scouts and leave a program languishing in the middle of the conference.

Hackenberg was one of 10 recruits from the 2012 recruiting class — along with 39 holdovers — from the summer of 2012 who kept the program competitive under O’Brien while it dealt with the devastating sanctions.

The seniors received a special pregame salute for their mettle in the wake of the sanctions and playing for former coaches Joe Paterno, Tom Bradley and O’Brien.

But before parents even had time to dab their eyes, Shelton zipped into the end zone for the score.

Michael Geiger kicked field goals of 36 and 39 yards in the first quarter for a 13-0 lead.

Sam Ficken set a Penn State single-season record with 23 field goals with his 41-yarder late in the half that made it 13-3.

Hackenberg twice blew chance in the quarter to make the game more competitive. He just overthrew Eugene Lewis on a corner route shy of the end zone and his final pass attempt of the half was bobbled by Chris Goodwin in the end zone and intercepted by Trae Waynes.

The Spartans kept up the pressure against Hackenberg in the third, forcing a fumble off a sack. Michigan State recovered at Penn State’s 18 and needed only four plays for Cook, who has guided the Spartans to three single-season offensive records for most points, most offensive TDs and most yards in a season, to hit Tony Lippett for a 10-yard TD and a 27-3 lead.

That score sent a good chunk of what was left of the announced crowd of 99,902 fans headed toward the exits.

Penn State’s Akeel Lynch had an 8-yard touchdown run in the fourth.

Langford put the finishing touches on the blowout with a 6-yard TD run that made it 34-10 and pushed him over the 100-yard rushing mark.

Penn State was leading the nation and the Big Ten in rushing defense (81.7 yards per game) and was second in the conference in total defense (267.2).

But Langford led an offense that topped 100 yards rushing and fell 2 yards shy of 300 yards of total offense.