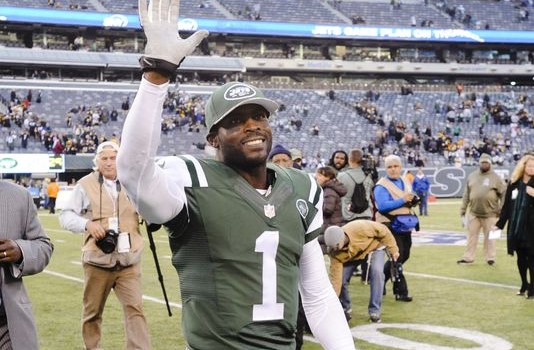 MICHAEL VICK HAS A REASON TO CROW AFTER BEATING STEELERS

It didn’t take Michael Vick very long to brag a bit after quarterbacking the dreadful New York Jets to a victory over the Pittsburgh Steelers.

He was asked if the Jets would have won more games if he had been chosen as a starter instead of Geno Smith.

“In my heart, yes,” Vick said Sunday after he led the Jets to a surprising 20-13 victory against the Steelers. “In my heart, I feel like on any team, I can be the starter. As long as it’s not Aaron Rodgers or Ben Roethlisberger. And I’m not saying those guys are better quarterbacks. I’m just saying that I’m confident in my abilities. If there’s an opportunity there, then, yeah.

“But, I do feel like at times, the opportunities were there but the coaches made the decisions not to do it. I totally understood everything that was taking place. It was all about developing a young quarterback, mentoring a young quarterback and giving him every opportunity to succeed. And now he has a chance to do it from afar and I think it’s going to help him.”

It’s too late for the Jets (2-8). This victory against one of the hottest teams in the league paints a portrait of the potential the team had to start the season. The AFC playoff race, however, is saturated with contenders. Beating the Steelers (6-4) is but a bright spot in an otherwise dismal season. New York’s coaching staff and front office still have to worry about their jobs. Nothing is safe.

Vick stressed he wasn’t trying to start a controversy with his comments. He said he’s merely that certain of his skill set.

He completed 10 of 18 passes for 132 yards, two touchdowns and added 39 yards on eight rushes. His 39 rushing yards helped him become the first quarterback in NFL history to rush for 6,000 career yards.

“Yeah, I should have,” Jets coach Rex Ryan said in answer to a question about whether he should have started Vick earlier.

“(Vick) played great. There’s no question. But you know what? I believe in Geno Smith as well and that’s the truth.”

When 2009 No. 5 overall draft pick Mark Sanchez didn’t pan out in New York, the team cut him. Now, he’s starting for the first-place Eagles while Nick Foles recovers from a clavicle injury.

Smith was supposed to be the reclamation project. And with Ryan announcing after the game that he’s “sticking with” Vick, it’s safe to chalk up Smith’s tenure as the starting quarterback with the Jets as a failure.