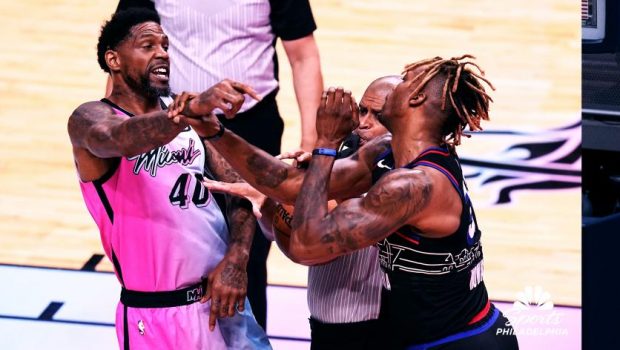 Jimmy Butler had 21 points, Bam Adebayo 18 points and 12 rebounds and the Miami Heat beat the hell out of the Sixers 106-94.

Miami captain Udonis Haslem got his first minutes of the season in the first half, scoring four points and getting ejected with two technical fouls in just under three minutes.

Tobias Harris scored 21 points, Shake Milton added 12 and Danny Green had 11 for Philly, which could have wrapped up the East’s No. 1 seed with a win. MVP candidate Joel Embiid, who was dealing with the flu earlier in the week, managed only six points on 3-for-9 shooting.

The Sixers (47-23) go home for the final two games of the season, both against Orlando, tonight and Sunday. Win either of those, and no matter what Brooklyn or Milwaukee do the rest of the way the 76ers will be the No. 1 seed in the East for the first time since 2001.

This one was never close; Miami led 38-22 in the first quarter, the last of those points coming on Haslem’s first basket of the season. He was ejected early in the second after exchanging words with Dwight Howard — not long after he tried to play peacemaker when Embiid and Miami’s Trevor Ariza got into a back-and-forth.

Ariza got rolled up on by a tumbling Embiid and hurt his ankle, briefly leaving the game. Ariza took exception to the play but was able to eventually return; they talked it out in a calmer fashion at halftime.

Miami led by 22 in the first half, didn’t let the lead fall below 17 in the third and stretched the margin to 26 early in the fourth.