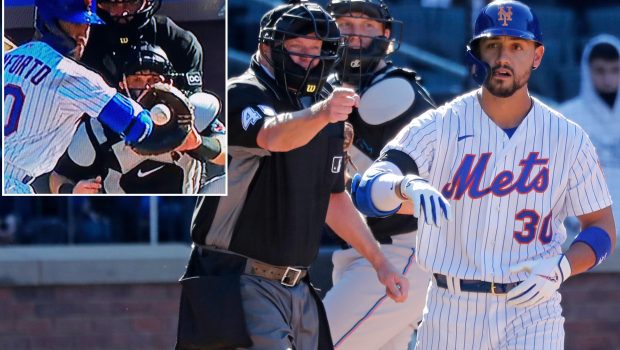 METS WIN ON THIS PHANTOM (WE DARE YOU TO FIND IT) HIT-BY-PITCH!

Michael Conforto got called out on strikes in the ninth inning when plate umpire Ron Kulpa went from signaling a punch out to ruling that Anthony Bass’ slider clipped Conforto’s right elbow guard, sending the Mets home with a win  that seemed unlikely when the inning started.

Conforto was leaning into the pitch as he got clipped, leaving the Marlins to cry foul as the winning run in the Mets’ 3-2 victory was forced home.

And Kulpa later admitted to a pool reporter that he blew it.

“The guy was hit by the pitch in the strike zone,” Kulpa said. “I should have called him out.”

MICHAEL CONFORTO GETS HIT BY A PITCH AND THE METS WIN IT 3-2!!!!! pic.twitter.com/R1QdgiRQJ5