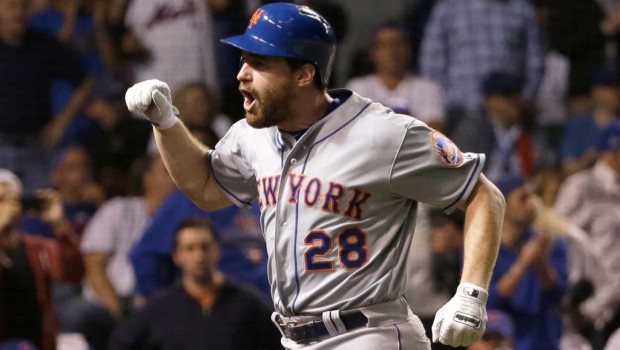 METS SWEEP CUBS (AND IT WASN’T CLOSE!) TO GO TO WORLD SERIES!

To call the New York Mets’ NLCS victory over the Chicago Cubs a sweep doesn’t do justice to brooms.

And to say that Daniel Murphy (above) is on a hot streak is an understatement of such magnitude that … well, you get the picture!

Murphy, the easy choice for MVP of the National League Championship Series, continued his assault on playoff pitchers with yet another home run in the Mets’ 8-3 victory Wednesday night, which completed a four-game sweep of the Chicago Cubs in Wrigley Field.

By homering in a sixth consecutive game, belting a two-run drive over the center-field wall in the eighth inning, Murphy set a postseason record and capped one of the most remarkable playoff series in memory.

Carlos Beltran’s eight-homer outburst for the Houston Astros in 12 games during the 2004 playoffs falls in a similar category – Murphy has seven long balls in nine games so far – but the heroics by the Mets second baseman are certainly more surprising.

Outfielder Michael Cuddyer, who won the 2013 NL batting crown, was asked what it feels like to get on that kind of streak.

Not only did Murphy clear the fences for the fourth time in this series, tying an NLCS record, but he missed another by just a few feet in the seventh, settling for a double as part of a 4-for-5 night that left him with a .529 series batting average. His 1.294 slugging percentage also set an NLCS mark.

Murphy, perhaps growing more comfortable in his role of postseason beast, allowed himself a rare fist pump as he rounded the bases. The drive into the basket in center increased New York’s lead to 8-1, making it the sixth time he has homered in a Mets win. Only the one he hit off Clayton Kershaw in Game 4 of the Division Series came in a losing cause.

Murphy has been so locked in that he went up looking for a changeup against Cubs reliever Fernando Rodney and somehow was able to react to the fastball. And it clearly doesn’t matter these days who’s on the mound. Murphy mistakenly said the homer in the eighth came off Hector Rondon, who instead pitched a scoreless ninth.

“He threw two heaters, and the second one exploded on me,’’ Murphy said of Rodney. “So now I’m like I don’t know what to look for. I might as well stay in the changeup because I don’t have the fastball measured. And he threw another heater and I just swung. I hoped I would have took it. And then when I hit it, I said, ‘Oh, my goodness.’’’

Murphy’s barrage helped the Mets outscore the Cubs 21-8 in the series, but on this night he didn’t do the most damage. First baseman Lucas Duda became the second Met in this postseason to drive in five runs in a game, tying the franchise postseason mark also matched by Curtis Granderson in the Division Series.

Duda, who drove in 15 runs in a four-game span in late September, whacked a 94-mph fastball from Jason Hammel for a three-run homer to put New York ahead 3-0 in the first, then broke the game open with a two-RBI double in the second.

That fulfilled manager Terry Collins’ desire to have more hitters heat up as the series went along. Outfielder Yoenis Cespedes was also starting to swing the bat well but had to leave the game in the bottom of the second with a sore shoulder he was told was the result of swelling in the joint.

Cespedes confirmed he played golf earlier in the day, which he believes helps his baseball swing, and said the injury occurred in his first at-bat. He downplayed any concerns, though, saying the team medical personnel told him it would take only two or three days for the injury to heal.

“On Sunday I’ll be fine,’’ Cespedes said in Spanish.

By then the Mets will know their World Series opponent, and their bullpen will have gotten a rest after throwing 4 1/3 innings Wednesday in relief of rookie Steven Matz, who allowed just four hits and a run but got an early hook.

Closer Jeurys Familia made his fourth scoreless appearance of the series and eighth of the playoffs, but even he acknowledged he’s happy not to have to deal with a hitter in such a zone as Murphy.

“I don’t want to face Murphy right now,’’ Familia said with a laugh when asked how he would pitch to him. “He’s feeling it, and when that happens a player has to take advantage of it. Everything’s going well for him.’’

And, by extension, for the Mets as well.