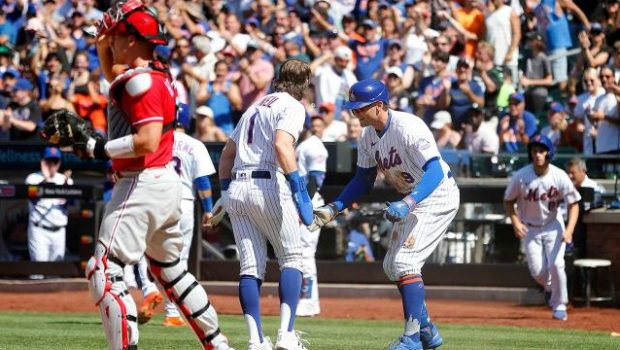 METS SHOW PHILS WHY WILD CARD IS ONLY HOPE WITH 48 TO PLAY!

Okay, here’s the obvious takeaway from the Phillies losing two out of three to the Mets at Citi Field:

The Mets are the big dogs in the National League East, and every other team is just running in place hoping for a wild card spot.

Luckily for the Phils, they are in the third and last WC position with 48 games to play.

Chris Bassitt hurled five scoreless innings, Francisco Lindor set the franchise record for RBI by a shortstop and the New York Mets defeated the Philadelphia Phillies 6-0 Sunday for their 17th win in 20 games.

The Mets posted their second straight shutout and kept 5 1/2 games ahead of Atlanta atop the NL East. The Mets and Braves open a four-game series in Atlanta beginning Monday. New York leads the majors with 16 shutouts.

The Phillies have dropped three of four after winning seven straight.

After Mets aces Max Scherzer and Jacob deGrom combined to allow just a single run over 12 innings in the first two games of the series, Bassitt (10-7) took his turn keeping Philadelphia off the board.

“I think there’s no secret how good our pitching staff is, especially when you have guys like Jake and Max,” Bassitt said. “It’s hard to score on us and it’s kind of what we’re built for.”

The right-hander, who scattered four hits and struck out five, has gone 24 consecutive innings without allowing an earned run.

“We had some trouble scoring runs in this series, obviously,” Phillies manager Rob Thomson said. “Part of it is due to good pitching and part of it was due to the fact that when runs are at a premium, sometimes you try to do to much and I saw a lot of that today.”

Lindor singled home Brandon Nimmo, who led off the Mets first with a double. It was Lindor’s 82 RBI, surpassing José Reyes’ total of 81 set in 2006.

“He’s one of the players I grew up watching,” Lindor said of Reyes. “I respect him a lot and whenever I can be next to him on something like this, it’s special.”

“I wasn’t really sure what happened,” McNeil said. “I kind of saw they weren’t paying too much attention and I thought it was pretty good chance to make it and put some pressure on the defense, so I decided to go.”

Wheeler, who left the Mets as a free agent after the 2020 season, allowed six runs in six innings. He struck out five and saw his ERA climb to 2.92. He entered the game having allowed just 11 earned runs over his last seven starts (45 2/3 innings).