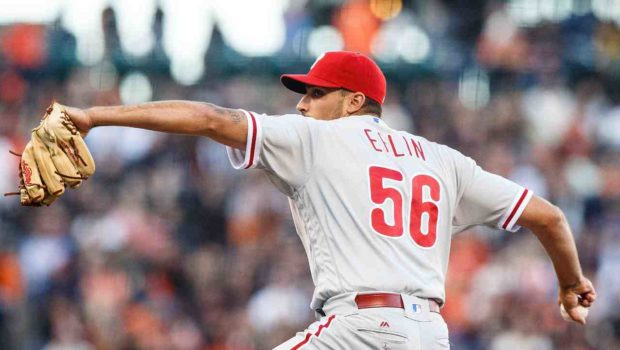 The New York Mets host the Phillies in the opening game of a three-game series tonight at Citi Field.

The Mets (7-6) dropped their third straight game when rookie J.T. Riddle hit a two-run homer in the bottom of the ninth to lift the Miami Marlins to a 4-2 victory.

The Phillies (4-8) lost for the fifth time in six games when Bryce Harper hit a two-run homer in the bottom of the ninth to give the Washington Nationals a 6-4 win.

Each of the Mets’ three weekend losses came in the Marlins’ final at-bat. Miami catcher J.T. Realmuto hit a tiebreaking RBI double in the bottom of the ninth inning in a 3-2 victory on Friday, and Christian Yelich (two-run blast) and Giancarlo Stanton hit consecutive homers in the eighth inning Saturday to spark a come-from-behind 5-4 win.

The difficult losses didn’t dampen the spirit of New York manager Terry Collins, who called a team meeting Sunday to ensure the Mets were as upbeat as he was.

“We’re just competing,” Mackanin said Sunday afternoon. “A lot has to do with the pitching.”

It will be the third start of the season for Wheeler, who earned his first win in more than 2 1/2 years last Wednesday, when he allowed three runs in 5 2/3 innings in the Mets’ 5-4 victory over the Phillies at Citizens Bank Park. Wheeler underwent Tommy John surgery in March 2015 and pitched just one minor league inning due to various setbacks last season, so the Mets hope to limit him to 125 innings this year.

Eflin will be making his season debut after sliding into the rotation spot vacated by right-hander Clay Buchholz, who sustained a torn right flexor pronator mass while pitching against the Mets last Tuesday night. Eflin tossed two complete games as a rookie last season but didn’t exceed six innings in any of his other nine starts.