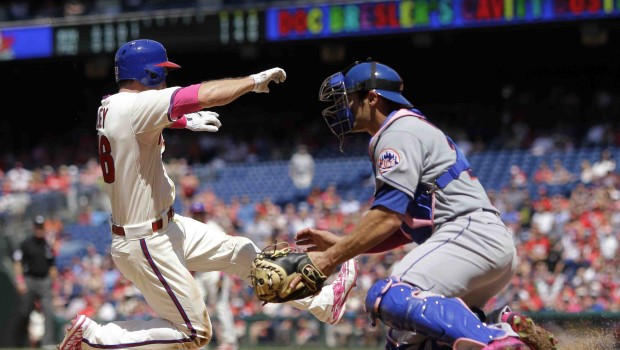 Chase Utley smacked his first double of the season and scored in the fourth.

Citizens Bank Park is starting to be regarded as Lourdes for visiting teams in need of getting better.

Until this weekend, the New York he Mets hadn’t won more than a two-game series in a long time, but they returned to their winning ways Sunday afternoon against the Phillies.

You can’t say enough about [Colon],” Mets manager Terry Collins said. “At his age [41], if you look around baseball, you have to look at this guy. You can’t marvel at him, you have to figure out how he gets outs, and it’s all about location. He never gives you the same look, and he’s tough to get a bead on.”Phillies right-hander Chad Billingsley struggled in his second start of the season. He allowed five runs in five-plus innings as the Phillies fell to 11-21, their worst start since they opened the 1997 season at 10-22.

“I don’t think anybody wants to be where we’re at,” Phillies third baseman Cody Asche said. “But, you know, we’ve got to live with it and we’ve got to find a way to get better.”Billingsley hit a solo home run to left field in the third inning to give the Phillies a 1-0 lead, but he could not follow that up with a shutdown inning. He allowed a run in the fourth to tie the game, and after the Phillies took a one-run lead in the fourth, he allowed Granderson’s two-run homer in the fifth.

Chase Utley’s batting average dropped to .099 Friday, the lowest among MLB qualified hitters through a team’s first 30 games since 1914. He hit a pinch-hit single Saturday night, and on Sunday doubled and scored in the fourth inning, raising his average to .116 with the 1-for-3 day. It was Utley’s first double of the season, which the Phillies hope is a sign things are going to pick up offensively for him.

Asche snapped a 0-for-23 slump with a double to left field in the seventh inning. “This game is tough,” he said. “It will wear on you. That’s why it’s important to just rely on your teammates and keep being the same person every day when you show up to the park. Don’t quit on yourself, don’t quit on the team. Keep working. Things will turn around.”