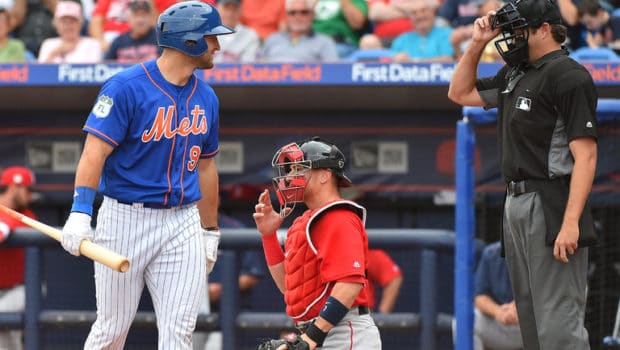 The Mets canned a second-round pick Andrew Church, which is no big news.

But he burned a boatload of bridges on the way out:

In a lengthy caption on an Instagram post from Thursday, Church tore into how he believed the team took advantage of his love for baseball and damaged his career in the process. He recalled tearing his UCL after the team allegedly pushed him into a game with no warm-ups, then having his request to see a doctor to ignored while the organization had him pitch for another team.

He also had choice words for the decision to bring on an unnamed “celebrity” to sell tickets, and even mentioned an accusation that the celebrity saw a cut of the team’s minor league sales.

“They made a mockery of our team by putting a celebrity on it to sell more tickets,” Church wrote. “I saw players lose their jobs because of it. We weren’t playing to win, we were playing to make everyone else money. Not the players. We never saw a cut. Well, allegedly that one player did.”

There was only one player on the 2017 St. Lucie Mets who could be considered a ticket-selling celebrity: Tim Tebow. 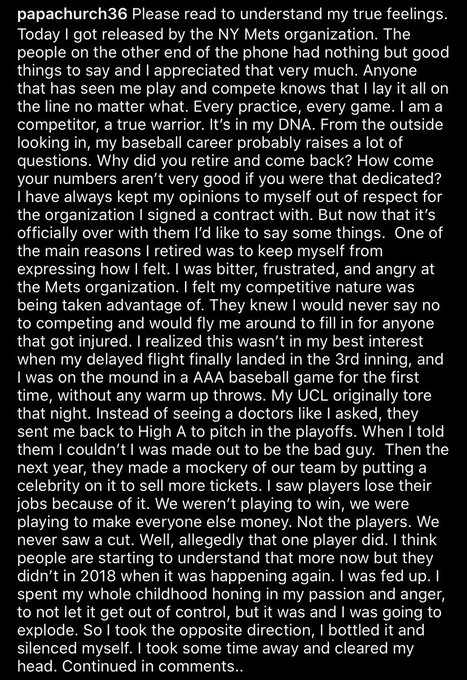 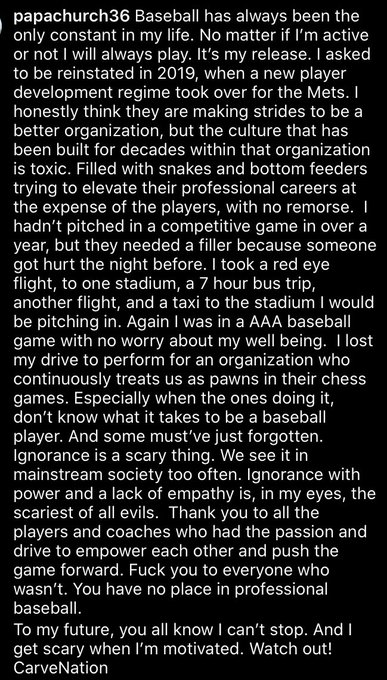 Tebow’s baseball career needs no introduction. The Mets drew everything from guffaws to outrage for their decision to sign the former Heisman Trophy winner and give him real at-bats with several of their minor league teams.

Church overlapped with Tebow on three different teams over the course of 2017 to 2019, starting with St. Lucie at High-A in 2017. Most recently, Tebow hit .163/.240/.255 in 264 plate appearances for Triple-A Syracuse last season at the age of 31, and received a major league spring training invite this year.

Tebow has also been pursuing this baseball career while balancing time with his broadcasting job at ESPN, which you don’t often see from players seriously trying to make the majors.

Where Tebow has lacked in batting average and time commitment, he has more than made up for it — at least in the Mets’ eyes — in ticket sales. Pretty much every minor league team has seen an uptick in attendance when he’s in town.