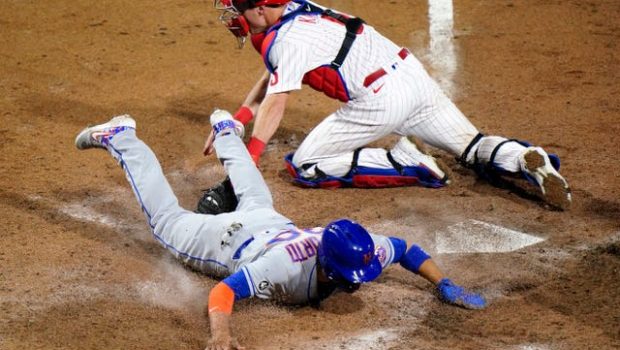 A COVID-19 outbreak affecting more than a third of the Nationals’ roster caused the postponement of their season-opening three-game series against the visiting New York Mets.

The Mets come to Philly Monday to start a series against the Phillies.

Four of Washington’s players have tested positive for the illness caused by the novel coronavirus, and another five were quarantining after contact tracing determined they might have been exposed, general manager Mike Rizzo said Friday in a video call with reporters.

His team is also in a holding pattern, uncertain when it actually will be allowed to play a game — or even hold workouts.

After games against the Mets scheduled for Thursday, Saturday and Sunday at Nationals Park were scratched, the next possible contest for Washington would be at home against the NL East champion Atlanta Braves on Monday.

“Depending on what happens in the next day or so, we’ll be in contact with MLB, and we’ll make the decision on whether we’re playing or not,” Rizzo said. “But we are, as of right now, preparing to play Monday.”