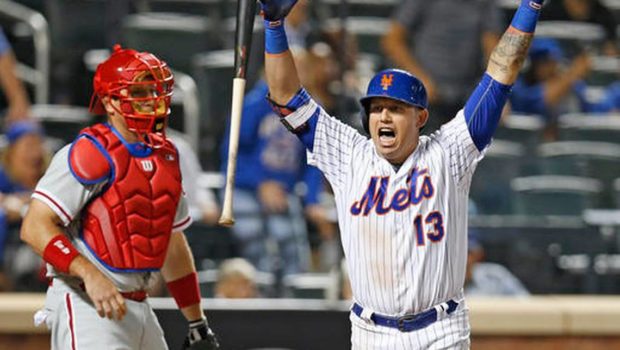 Asdrubal Cabrera (ahove) then hit a three-run drive during an 11th-inning rally to lift the Mets to a dramatic 9-8 win over the Phillies last night that kept them tied atop the NL wild-card standings.

Reyes only rejoined the Mets this summer after being released by the Colorado Rockies following a 59-day suspension for domestic violence. He’s been well received by fans at Citi Field and was jubilant as he rounded the bases, saluting the dugout as he approached first base and dancing withAlejandro De Aza in the dugout before exchanging exuberant high-fives with teammates.

“It never crossed my mind that I was going to be in this situation to play again for the New York Mets,” Reyes said. “It was an unbelievable moment.

“I don’t remember the last time I was that emotional running the bases,” he added. “When I was running home, a lot of stuff (was going) through my head.”

New York trailed 6-4 before pinch-hitter Brandon Nimmo singled off Gomez leading off the ninth and Reyes sent a changeup over the right-field wall with one out.

The Phillies went ahead 8-6 in the 11th when A.J. Ellis hit an RBI single off Jeurys Familia and Jim Henderson (2-2) walked Maikel Franco with the bases loaded.

Pinch-hitter Michael Conforto walked against Edubray Ramos (1-3) with one out in the bottom half, Reyes singled and Cabrera, who has been playing with a strained left knee tendon, sent a slider soaring to right, setting off a wild celebration. The Mets had been 0-63 this year when trailing after eight innings.

“As soon as I hit it, I knew the ball was going to be out,” Cabrera said.

“This was the toughest loss of the season,” said Phillies manager Pete Mackanin. “Our guys did a great job offensively. We should have had them. We just made a lot of bad pitches and let them right back in.”

The Mets tied a franchise record for an extra innings game by using 27 players in a win that took 4 hours, 23 minutes. They used 10 pitchers, matching the most used in a game in franchise history.

“Tonight’s game personifies exactly what the season is like,” manager Terry Collins said. “Up and down, up and down. And you’ve got to keep playing.”

New York wasted a lead provided by Curtis Granderson’s two-run homer and fell behind 3-2 when Ryan Howard and Cameron Rupp homered on consecutive pitches from Seth Lugo in the fifth. Lugo is among the rookies inserted into the Mets’ rotation because of injuries to Matt Harvey, Jacob deGrom, Noah Syndergaard and Steven Matz.