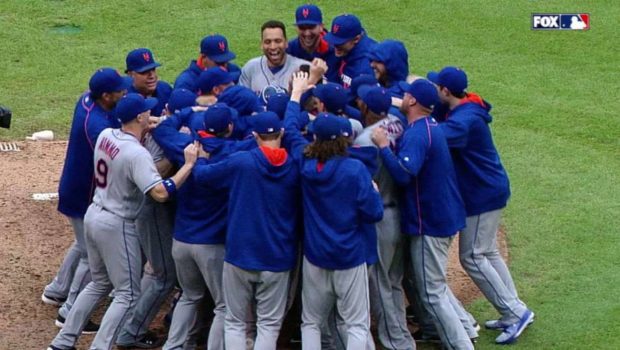 “This was hard,” Collins told MLB.com. “And our guys, they should enjoy this for a day, and then get ready.”

The Mets will play either the Cardinals or Giants in Wednesday’s win-or-go-home game, with the winner moving on to face the Cubs in a best-of-five National League Division Series beginning Friday. Neither the Giants nor the Cards can clinch a Wild Card spot Saturday. If the two are tied after Sunday, the tiebreaker game on Monday would be in St. Louis.

Over the coming days, the Mets will begin planning for the Wild Card assignment. Yesterday, they simply reveled in their 87th victory, which James Loney secured with a tiebreaking two-run homer in the sixth. Throwing his arms up in the air after making contact, Loney glanced back to a dugout bursting with optimism before dropping his bat and rounding the bases.

An inning earlier, Ryan Howard had tied the game with a two-run homer of his own, earning a curtain call from the thousands who came out to watch his final days as a member of the Phillies.