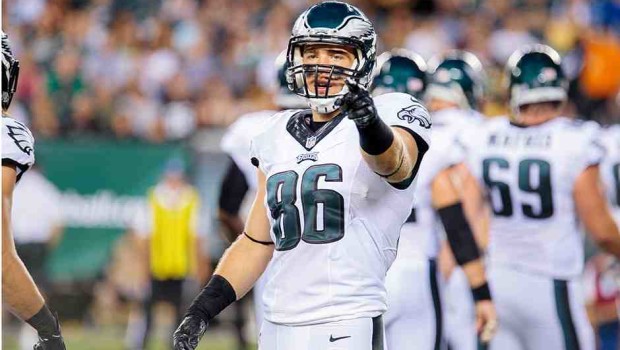 The Eagles got back to work yesterday, and even though the 10-1 Patriots are next up on their schedule there were some bright notes:

Sam Bradford, Zach Ertz (above), Jason Kelce and Jason Peters were all practicing.

Bradford (left, non-throwing shoulder) has missed the last two games since being knocked out of the Miami game in the third quarter with a concussion and separated shoulder.

He was cleared from the concussion last week but his left shoulder injury kept him out on Thanksgiving. He was a full participant in last Wednesday’s light practice but was still held out.

“Well, Bradford did some stuff last week, which we all discussed,” Eagles offensive coordinator Pat Shurmur said on Tuesday morning. “He’ll do more this week. It’s just a matter of him going out and training and then recovering from the training and then going out and doing it again. We’re just looking for him to go out and execute and feel good doing it.”

Ertz appears to be very far along in his recovery from a concussion. He was at practice, with a helmet, participating on Tuesday. He missed the Lions game.

Kelce (knee) and Peters (ankle) had helmets and were practicing. Kelce was able to play all game against the Lions despite his knee injury. Peters injured his ankle early on Thanksgiving and played just 10 snaps.