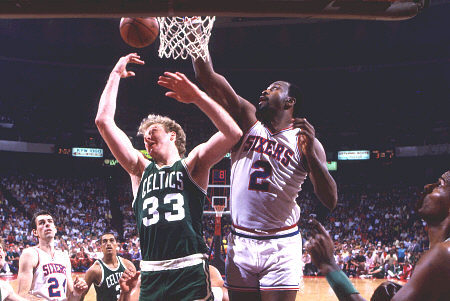 For those of you who are too young to remember the glorious 1980s, when the Sixers and the Celtics battles hammer and tong for Eastern Conference supremacy, it looks like the LeBron James-less East has set up Philly and Boston to compete again.

Here’s what Jackie MacMullan, late of the Boston Globe and now with ESPN.com says:

At this exact moment, Boston, Philadelphia and Toronto become the new big three in the East, although that could change depending on how the Raptors shake things up — and they should shake things up. Whether LeBron had stayed in Cleveland or not, the revival of the old Sixers-Celtics rivalry was emerging as the most lively and entertaining storyline in the East. I don’t know if it can reach the level of Moses Malone chanting, “Fo’, Fo’, Fo'” and Larry Bird declaring, “Moses eats s—,” but you know Joel Embiid will do his best to raise the stakes.