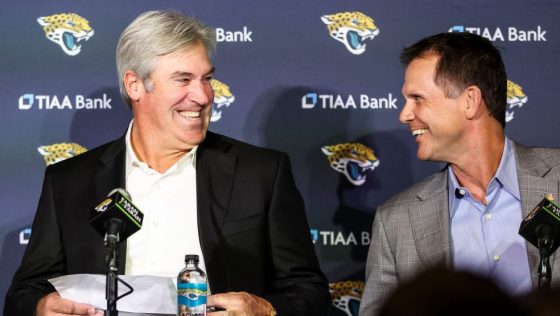 The dust has cleared in Duval after ex-Eagle coach Doug Pederson’s hiring to replace the awful Urban Meyer and lead the Jags into the future.

And Pederson has a foil in the front office, who may not be equal to Eagle GM Howie Roseman, except in one big category:

Trent Baalke’s presence was believed to be a negative for some head coaching candidates who didn’t want to work with him because of how things played out with the 49ers when Baalke was their GM in the early 2010s.

While that might have been an issue for some potential coaches, it didn’t stop Pederson from taking the job.

Pederson told Albert Breer of SI.com that he isn’t letting the opinions of others color his view of someone he’ll be working closely with in Jacksonville.

“A lot of these reports that are out there are from a lot of unnamed sources,” Pederson said.

“I can remember my time in Philly, back in ’16, there were a lot of unnamed sources that thought I wasn’t very good as a head coach. But they never put their name to it. And I’m like, ‘Well, what good is that? If you’re gonna say something, at least own up to it.’

“And I’ll tell you something — we’ve connected from day one, all the way back to my first interview with the Jaguars. . . . I can go sit in his office, he can come sit in mine and we don’t even have to talk ball. We just tell stories and that’s how you get to know people.”