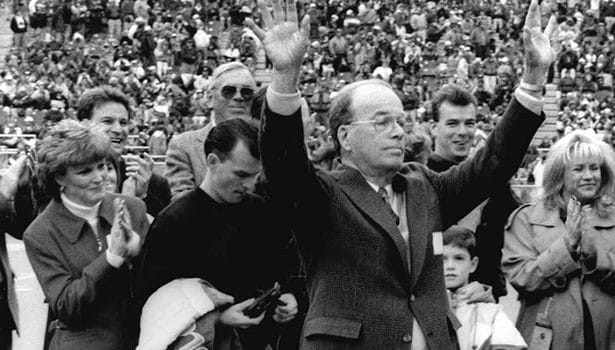 “I started working for the Eagles in 1949,” Gallagher, who died Friday at the age of 88, told me over over a 2010 breakfast in Ray’s diner in East Norriton, where the individual juke boxes play music from the ‘60s. “By 1963, we were a tight little group, huddled in a small office at 15th and Locust.”

No one was tighter than McNally.

“We ordered newspapers from around the country,” Gallagher remembers. “Not to see what people were writing but to scout players. I was the personnel guy, and that’s how we did the scouting. ‘Hey, look at the kid from Duke, he might be a good linebacker for us.’ ‘And how about this guy from UCLA?’”

Nick Skorich had coached the Birds the last three seasons and had gone 15-24-2, which wouldn’t cut it.

Wolman interviewed (though not necessarily in this order) Paul Brown, Otto Graham, Allie Sherman and George Allen, the defensive genius of the just crowned NFL champion Chicago Bears. Wolman wanted to hire Allen but was warned off by Bears owner George Halas, who felt Allen was not ready.

Back to square one, which was located in the NFL offices in Manhattan, where Joe Kuharich was supervisor of officials, waiting until he could get a head coaching job that would erase the stain of his dreadful four-year, 17-23 record as head coach of Notre Dame.

“I probably was influenced a bit by [NFL commissioner Pete] Rozelle,” Wolman admits over lunch. “Joe and Pete went back to the early ‘50s when they were both at the University of San Francisco. And he endorsed him strongly.”

Wolman gave Kuharich a five-year contract at $35,000 a year to be coach and general manager, and Kuharich started sweeping immediately.

First to go was popular quarterback Sonny Jurgensen, traded to the Redskins with free safety Jimmy Carr, a stalwart on the 1960 championship team; then popular receiver Tommy McDonald, another title game star, traded to Dallas. In about two months Kuharich had turned off the Eagle loyalists and severed virtually all ties to the glorious 1960 championship team.

When Wolman hosted a party at Bookbinder’s for the dispirited office staff, which feared for their jobs, Wolman announced that everyone would remain and they would get raises.

It was not unusual for Wolman to lavish gifts on his loyalists, especially those who were down and out. When he took over the Eagles, 68-year-old Jiggs Donoghue had been executive vice president since 1949. Wolman reassured him that his job was not only not in jeopardy, but, “I promise you, sir, you’ll have a job here with me for the rest of your life … I can learn a thing or two from an old football man like you.”

Several months later, Donoghue suffered a major stroke and wasn’t able to perform his Eagles duties. Each morning, Wolman had his limousine pick up Donoghue, take him to work and returned him in late afternoon to his home. He remained on the Eagles payroll as long as Wolman owned the team.

The same held true with the car that Wolman gave Foreman and the $83,000 he gave Snider for the down payment on his home.

By the summer of 1964, Wolman moved the team’s headquarters to an airy space on the first floor of the Bulletin Building across from 30th Street Station.

Jim Gallagher recalls: “Jerry upgraded everything, from typewriters to desks, telephones, and, importantly to me, our ability to wine and dine writers. Don’t forget, in those days we still had to sell the daily papers on the NFL story.”

Gallagher remembers one day before the Birds were due to play the Redskins in Washington he went to lunch at Duke’s with a local writer. He spotted the Washington Post’s Dave Brady across the room, waved hello and motioned to the captain that he wanted to pick up Brady’s check. The captain shook his head no and pointed in the direction of Wolman, who smiled at Gallagher and mouthed, “Too late, I’ve got it.”