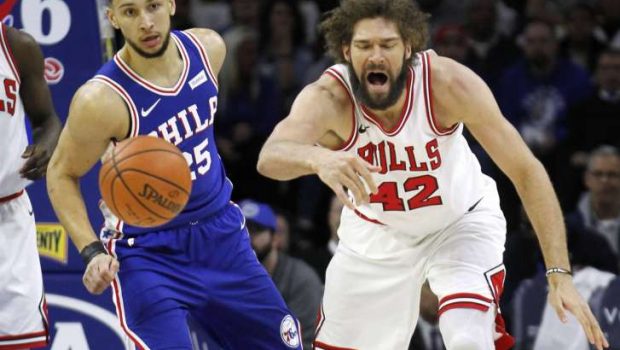 The Sixers are on the road tonight in Utah, but GM Elton Brand should be busy on the phone:

How good would Chicago Bulls center Robin Lopez look in a Philly uni?

More importantly, with his 7-foot, 275-pound frame and 9-points-and 6-rebounds-a-game career stats, how great would it be if he were a buyout next month?

The buyout market is expected to be robust. Zach Randolph, Kenneth Faried, J.R. Smith (unless he is traded) are just a few of the names.

But the biggest and best may be Lopez.

The Warriors are eyeing him as someone to platoon with DeMarcus Cousins, reports Marc Stein of the New York Times in his weekly newsletter.

One name to file away here: Chicago’s Robin Lopez. The Bulls have made Lopez available via trade along with the former No. 2 overall draft pick Jabari Parker, according to league sources, but moving the experienced center isn’t so simple given his $14.4 million salary.

There will be little need for the Bulls to keep Lopez, 30, beyond Feb. 7 if they don’t find a workable trade for him, which may set up the former Knick to emerge as one of most coveted buyout candidates. Golden State’s positional needs also could certainly change between now and then, but Kevon Looney is the closest thing to a proven center currently available to Coach Steve Kerr.